Australian Olympic swimmer Madeline Groves says she was sexually abused from the age of 13 by a person who is still working in the sport.

Ms Groves made a series of revelations in an interview with the ABC on Wednesday, following social media posts calling out “misogynistic perverts and their bootlickers” that she wrote when withdrawing from the Tokyo Olympic trials in June. 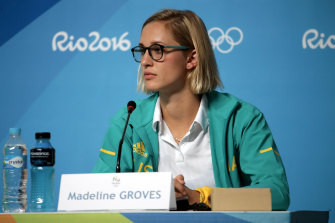 The 26-year-old declined to name the individual who abused her as she doesn’t want to pursue criminal charges. She told ABC television’s 7.30 the person still worked in swimming.

Swimming Australia said it had assembled a panel of investigators to look into issues around women and girls in the sport.

The organisation said it had also referred the sexual assault allegations to Queensland police.

Ms Groves separately accused two coaches of mistreating her during the ABC interview. 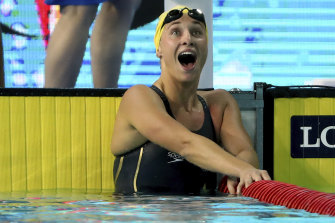 Madeline Groves, pictured at the Commonwealth Games on the Gold Coast in 2018.Credit:AP

She made serious complaints against Michael Palfrey, who coached her from age 12 to 15, for his practices which included having swimmers weigh themselves on the pool deck, often when wet.

She said she would “run to the change rooms” when he conducted weigh-ins and didn’t eat as much as she wanted to during meals.

“I specifically remember on a training camp in New Zealand, I would have been 13 years old, and we weren’t allowed to go into the dining room and eat without our coach being there to witness that we were eating the correct meals,” Ms Groves told the ABC.

“There was a pretty consistent attitude that women were just emotional, high-maintenance beings that were unable to cope with the pressures of high-performance sport.”

Swimming Australia told the ABC it had referred the allegations against Mr Palfrey to Sport Integrity Australia.

Ms Groves also spoke about the conduct of former Australian national youth coach Glenn Beringen while he was coaching her at the Oceania Swimming Championships in Samoa.

“As a 15-year-old, I was sent to a foreign country basically alone with no real support network, having this strange man be the one that was going to look after me,” Ms Groves told the ABC.

“There was seemingly no interest in speaking to me when I was clothed … but as soon as I was in my togs, it was the time when this person wanted to take me away from the group and have these intimate conversations with me and stand very close to me, inside my personal space and really standing over me and staring and leering at me.”

Ms Groves said she made a complaint about Mr Beringen in 2017 as part of an independent review by the Australian Swimmers Association into the FINA World Championships campaign in Hungary.

Mr Beringen told the ABC the allegations were untrue and he had “fully co-operated with an independent investigation into these allegations, and they were found to be without foundation”.

Swimming Australia told the ABC Ms Groves was asked to provide further details to an independent investigator but declined to do so.

The ABC reported that Ms Groves was told by Swimming Australia that her claim was “unsubstantiated”.

The organisation has not said if findings from its investigation will be made public when it reports next year.