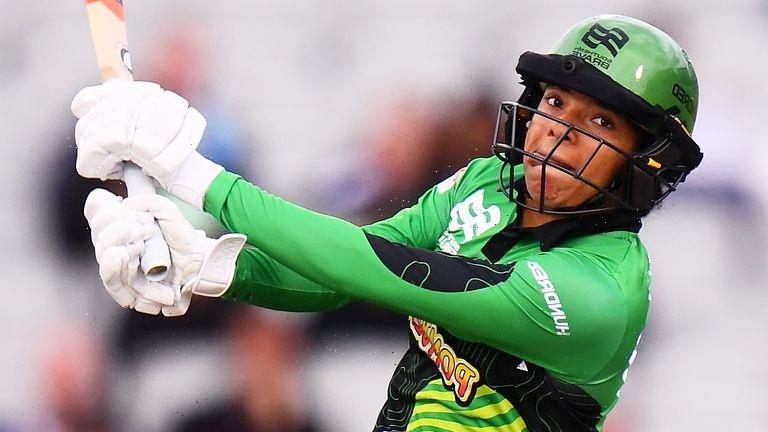 Leaders Southern Brave laid down a dominant performance against the second-placed Northern Superchargers with a seven-wicket win via Duckworth-Lewis-Stern thanks to a wonderful 50 not out off 28 from Sophia Dunkley at a rain-soaked Ageas Bowl on Saturday.

STORY OF THE MATCH

The Superchargers, put in after the hosts won the toss and bowled, made a sprightly start and after captain Lauren Winfield-Hill smashed a six down the ground they were 33-0 with exactly a quarter of their balls gone and in a fine position.

But Winfield-Hill was out next ball and two quick wickets from Lauren Bell – including the danger woman in Jemimah Rodrigues, comfortably the top run-scorer in the competition so far – helped slow the visitors’ charge as the sides went off and on and off again in the sodden conditions.

With a sustained delay, the Superchargers innings was stopped at 76-3 off 73 deliveries, with a revised, gettable target of 89 off 75 deliveries (with a powerplay of 19 balls) set via the Duckworth-Lewis-Stern method.

Big six but then out next ball for Lauren Winfield-Hill! 🧨

How important could breaking that opening pair prove to be?!#SouthernBrave 🟢 #Northern Superchargers 🟣

Danni Wyatt, Smriti Mandhana and Stafanie Taylor departed for a combined three runs, thanks to a superb 2-9 off her 15 balls from Moore, but, crucially, Sophia Dunkley was dropped in successive balls by Alice Davidson-Richards on 14.

Although both were tough chances, Dunkley punished that profligacy with an unbeaten half-century at a strike rate of 179, with fine support from Maia Bouchier’s 33 off 19 to help anchor the Brave home in a crucial match as first extended their gap against second.

FOR WHOM THE BELL TOLLS

Bell did not get off to a good start. She sent down a poor waist-high delivery which was knocked for four, the subsequent no-ball also allowing Rodrigues a reprieve despite being caught.

But the tall 20-year-old – nicknamed ‘The Shard’ – came back brilliantly from that initial setback and proved her resilience. 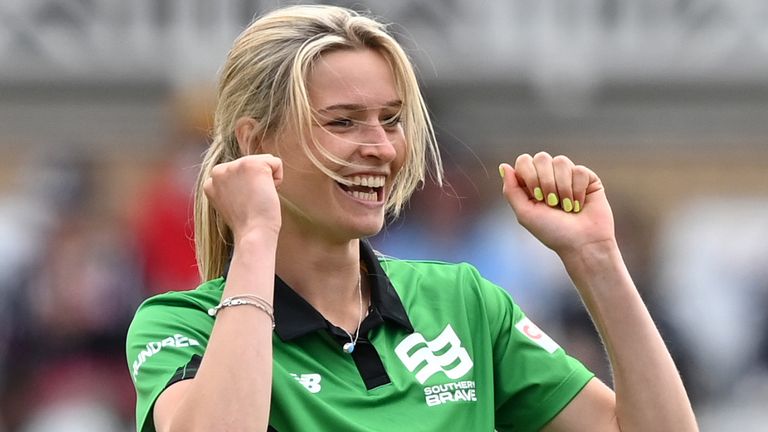 She dismissed Rodrigues and Bess Heath in quick succession in the middle overs, a key time to hit the opposition.

An international call-up for England could be on the cards if Bell keeps up this form.

The Brave were, frankly, panicking at 26-3 with their three traditional ‘gun’ batters down.

But 23-year-old all-rounder Dunkley kept calm amid the storm and pressure, hitting five fours and two sixes in a barnstorming innings.

And that's the ball game! 😊

Sophia Dunkley's fine half-century leads the hosts to a comfortable win. What a performance! ✔

It was fitting that she hit the winning runs, celebrating joyously on the pitch, and that the winning shot brought up her 50.

Those two milestones were nothing less than Dunkley deserved.

CATCH OF THE MATCH

Skipper Winfield-Hill, who may be frustrated with losing her wicket after a quickfire 14 from 14, came up with a proactive field change to trap England international Wyatt.

Knowing the opener’s propensity for the leg-side sweep, she cleverly moved Alice Davidson-Richards to just behind square leg.

OUT! Brave opener Danni Wyatt has to walk! 😲

Wyatt then swept straight at the fielder, who took a simple catch – almost catching practice, really.

The take itself was not particularly spectacular but it came from a moment of cunning tactical entrapment from Winfield-Hill.

Match winner Dunkley told Sky Sports: “I did feel a bit of pressure when I came in and we’d lost those early wickets, but it was a good pitch once you got in. Maia Bouchier came in and did really well, she took a lot of pressure off me.

“We wanted to improve on our running in the wickets especially after our last game that we lost against Manchester (Originals), so it was pleasing to do that and put the pressure back on the fielding team.

“Charlotte Edwards is so knowledgeable and it’s so great to work with her. When I got a couple of low scores earlier in the tournament, she backed me and just told me to go out there and play as I do and it’s really nice to have that support.”

The women’s sides, both in upper mid-table, have won three of their five matches so far, while the visiting Rockets men’s side will look to defend their position at the top of the table.

After that Birmingham Phoenix entertain the Welsh Fire in the women’s and men’s tournament at Edgbaston, with both matches being played on Sky Sports Cricket, Sky Sports Mix and Sky Sports Main Event from 2.30pm and 6pm respectively.

The Phoenix women’s side, bottom of the table, will aim to make up some ground on the Fire, and the Midlands men’s side will hope to improve on their position of third against the second-bottom Welsh side.

Watch The Hundred live on Sky Sports between now and August 21.