That's all good. But the best thing about the start of the NBA season – or just the preseason, which began this week – is that it thrusts the league back into the conversation.

Not just about sports, but about the connection sports have to everything else, from politics to fashion, civil rights to gun rights. 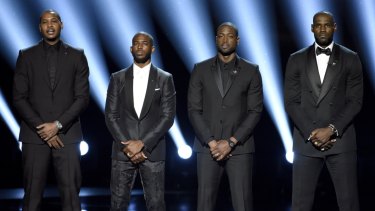 No league dives into the real issues of today so naturally and so readily. This does not feel like a time to just stick to sports. Thankfully, the NBA is where meaningful conversations reside.

At the start of the season, when plenty of people are excited to see LeBron James and Stephen Curry play, I'm excited to hear what they'll say.

Most sports leagues feel like floating satellites, untethered from the real world. Not the NBA. Thanks to its outspoken players, and to coaches such as Steve Kerr and Gregg Popovich, and to a commissioner like Adam Silver, the NBA feels like a part of the world we live in.

The NBA is comfortable being connected. Opinions count. Expression is (mostly) encouraged. Politics is not filtered through political correctness, not parsed by focus groups or marketing departments.

Kerr, whose father was assassinated by gunmen while serving as president of American University in Beirut, does not keep his gun-control beliefs to himself. Popovich fearlessly chimes in on politics. James and others expressed support for the Black Lives Matter protests against police violence. Silver's first big act as commissioner was to remove an owner, Donald Sterling, for racist behaviour. 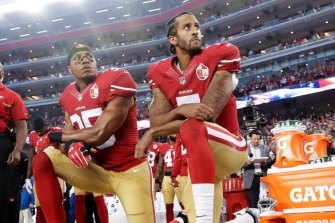 Iconic moment: Kaepernick, right, takes a knee during the US national anthem in 2016.Credit:AP

The NFL? There have been more meaningful discussions about Colin Kaepernick among NBA executives, coaches and players than anything we've heard within the NFL in the three years that Kaepernick has been out of football.

Major League Baseball? It once got cultural credit for steering civil rights through barriers and into the mainstream, but it surrendered that role long ago. It now belongs to the NBA, mostly, with its better – but far from stellar – recent history of hiring coaches and executives of colour, of promoting women into roles as assistants (10 this season), referees and broadcasters, and creating an environment where inclusivity does not feel entirely like a marketing campaign.

The NHL? The commissioner there still denies that hockey has anything to do with the suffering of former players, despite the growing numbers of dead ex-players with chronic traumatic encephalopathy, or CTE.

The NBA isn't perfect. Owners like Sterling, issues like a racist dress code, even the clumsy unease of players and teams fully engaging in anthem protests that they purported to support are still visible in the rear-view mirror. Questions of equal pay and support for WNBA players sit on the horizon, among other things, a reflection of the women's soccer team.

But the NBA does at least one thing better than other leagues: It joins the conversation and adds to it. It is a game for adults.

Glad to get it going again.