Caitlin Thwaites says she feels for former national teammate Caitlin Bassett and would respect her decision if she left Super Netball next year in search of game time after the Giants star was forced into a bit-part role this season.

Thwaites and Vixens teammate Tegan Philip will both walk away from the game at the end of the year after the duo announced their retirements on Monday. The pair are preparing for the finals after the Melbourne side won the minor premiership last week. 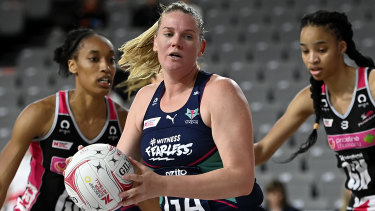 Caitlin Thwaites of the Vixens in action during round seven.Credit:Getty

Thwaites said she would take time off to work out what is next in her career. First up will be completing a psychology degree at Victoria University, she said.

"I've wanted to finish my uni degree and wanted to get into the keynote speaking spaces," the 33-year-old said. "I don't think I will be too far away from netball, it's part of my DNA now.

"I love the team environment and feeling like you can add value in different spaces and I definitely feel like I can still be adding value."

Thwaites played 55 games for the Diamonds over 13 years, scoring 1106 goals with a 92 per accuracy, while Philip played 14 Test matches and has scored 130 goals across seven years with the national squad.

Thwaites said now the retirement announcement was out of the way she could focus on "lifting the trophy".

"We have been thinking of everybody in Victoria … we hope that we are providing some entertainment and a distraction for all the people back home in Melbourne," she said.

28/09/2020 Sport Comments Off on Thwaites backs Bassett move to extend career, even as Vixen finishes her own
Lifestyle