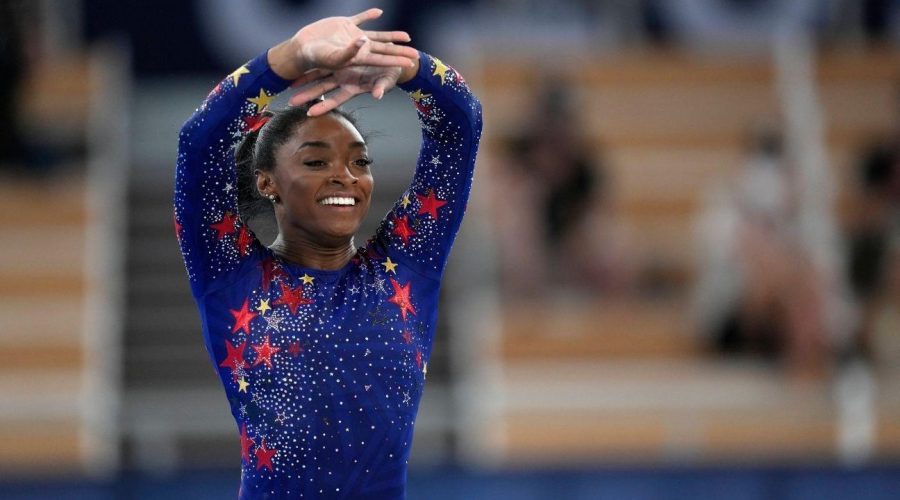 Tonight at the Olympic Games, Simone Biles and the U.S. gymnastics team compete for the first time (at 2:10 a.m. ET!) in a long night of gymnastics qualifications.

Already, the first Olympic gold medal in skateboarding has been awarded. Plus, two-time Olympic medalist April Ross and her new partner Alix Klineman won their first match in beach volleyball and the United States broke its one-day medal drought with six medals in the pool. (Here’s the lowdown on the Team USA athletes to watch there.)

We’ve got you covered with live updates throughout:

Making their first appearance of the Tokyo Games, the U.S. women, led by Simone Biles, attempt to qualify for the team, all-around and event finals.

Chase Kalisz took one step up the podium from his silver-medal Olympic finish in 2016, winning gold in the 400M individual medley with a time of 4:09.42. His dominating performance was the first overall medal for the United States in these Oympic games, but only by fractions of a second. Teammate Jay Litherland took the silver in the event as well.

Later in the pool, Kieran Smith earned a bronze medal for Team USA in the 400M freestyle.

Australia set the world record in the women’s 4x100M (3:29.69), but the Americans added another medal with a bronze medal in the event to give them six on the night.

Huston off the podium as skateboarding makes its debut

In one of the biggest surprises of the Games so far, six-time world champion street skateboarder Nyjah Huston of Team USA, the hands-down favorite to win his sport’s Olympic debut, finished off the medal podium in seventh place. Instead, Jagger Eaton, 20, of Mesa, Arizona, became the first U.S. skateboarder to earn an Olympic medal. Eaton finished third behind current street skate world champion Yuto Horigome of Tokyo, Japan, and Kelvin Hoefler of Sao Paolo, Brazil.

In a final filled with multiple bails and tough slams, Eaton skated loose throughout, grooving to whatever he was rocking in his ear pods, which caught the attention of fans at home.

Eaton has been a contest staple since making his X Games debut in 2013 as the youngest competitor in the history of the event (his record was beaten last week), but has skated in Huston’s shadow in the lead-up to the Olympics. His consistency in the event landed him on the Olympic podium. Huston, unwilling to play it safe despite falling behind early in the contest, attempted one of his toughest tricks three times during the best trick portion of the final, but failed to land it. With the seventh and final round in the books, headlines about Eaton’s medal wrote themselves. — Alyssa Roenigk

Elsewhere, skateboarding royalty was on hand with a face of the future.

Plus, you gotta bail, bro.

World No. 1 in women’s tennis out

And on the men’s side, former Olympic champion Andy Murray has withdrawn from singles competition because of a thigh strain.

Amanda Chidester’s two-run double in the bottom of the eighth inning kept Team USA undefeated in these Olympics at 4-0 and sent them to the gold medal game, where they will meet host Japan on Monday. The U.S. got 13 strikeouts from Monica Abbott in the 2-1 victory over Australia.

Teammates Alix Klineman and April Ross — nicknamed the A-Team — started off right with a Pool B beach volleyball win over China’s Wang Xinxin and Xue Chen, 21-17, 21-19. Ross is in her third Olympics after pairing with Jennifer Kessy in 2012 and winning silver before winning bronze with Kerri Walsh Jennings in 2016. She’s seeking to join Jennings and Misty May-Treanor as the only players to win at least three medals in women’s beach volleyball. For Klineman it was her first Olympic experience. “I was a little nervous but really excited for this match,” she said.

Just days after competing in the NBA finals, Khris Middleton and Jrue Holiday of the Milwaukee Bucks and Devin Booker of the Phoenix Suns were again working on their game in Tokyo.

And the Olympic men’s basketball tournament got underway with Team USA set to tip-off later. Germany got off to a fast start against Italy.

The United States men’s gymnastics team advanced to the team final with a fourth-place finish in qualifications.