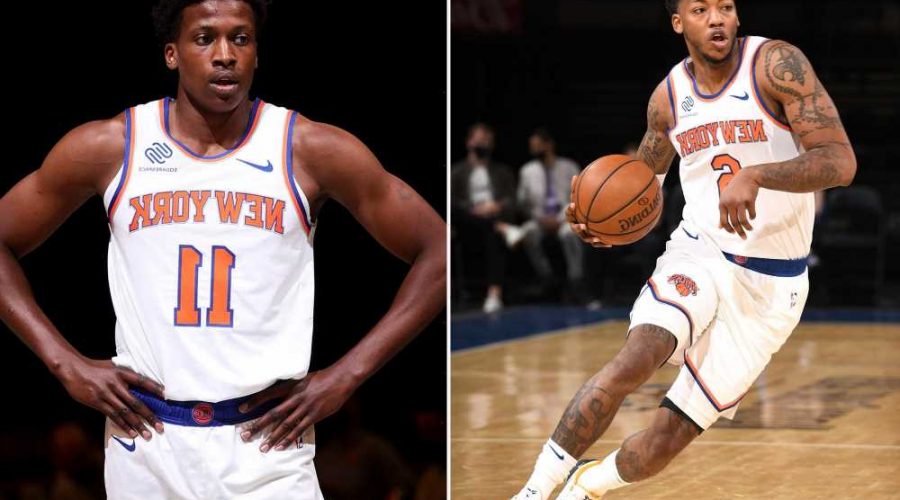 Even hated Knicks villain declares they ‘are back’

As far as maligned starting point guard Elfrid Payton, Knicks coach Tom Thibodeau sounded like he’s going to dance with the one who brought you.

However, Thibodeau referenced Frank Ntilikina as possibly having a first-round role because of the Frenchman’s past success defending Hawks superstar point guard Trae Young. Ntilikina, a 2021 restricted free agent, has been out of the rotation most of the season.

Meanwhile, Payton hit rock bottom down the stretch of the season, failing to score more than two points in any of the final four games. In the season finale Sunday vs. Boston, his body language even looked off-putting as he struggled massively in 14 scoreless minutes, getting layups blocked on both of his drives to the rim.

But it didn’t sound like the Knicks coach will make a starting point-guard change for Game 1 Sunday at the Garden. He’s stuck with Payton all season long.

“Look, I’ve said this all along — the depth of our team is one of our strengths,” Thibodeau said. “There’s things that Elfrid provides for us that are a big asset to our team. His size, his defense, those are important factors. And then you look at it in totality – how does the team function? As is the case with most young players, there’s going to be ups and downs. You don’t have to shoot well to play well. Just go out there and give us what you can.

“The thing that I love about our team is if someone’s not going good, then another guy steps in and if he’s going good, everyone’s cheering for that guy. The most important thing is the team winning. That’s where I want the focus to lie.”

Thibodeau apparently still believes the Knicks are better functioning with Derrick Rose coming off the bench and Thibodeau limiting Payton’s minutes when he’s not playing with fire.

In the last seven games, the Louisiana-Lafayette product is averaging 2.7 points with his minutes reduced to 14.6. He’s shooting 24.2 percent in that span.

Meanwhile, Ntilikina has seen cameos for defense lately. The 2017 lottery pick got a huge hand when he came in for the final minute of the third quarter in Sunday’s Boston game for defense. Playoff Frankie?

Thibodeau said he’s considering finding a spot for him.

“Frank has sort of been in that role as a defensive stopper,” Thibodeau said. “He adds great value to our team. What you guys don’t see is he and Kevin Knox and a bunch of other guys who aren’t in the rotation, how hard they work in practice. They’re providing a lot to our team and whatever their strengths are, we’re going to try to take advantage of that.”

If Ntilikina finds a niche vs. Atlanta, that would mean even fewer minutes for Payton or a reduction for Rose, 32, who has struggled defensively since spraining his ankle in Los Angeles eight days ago.