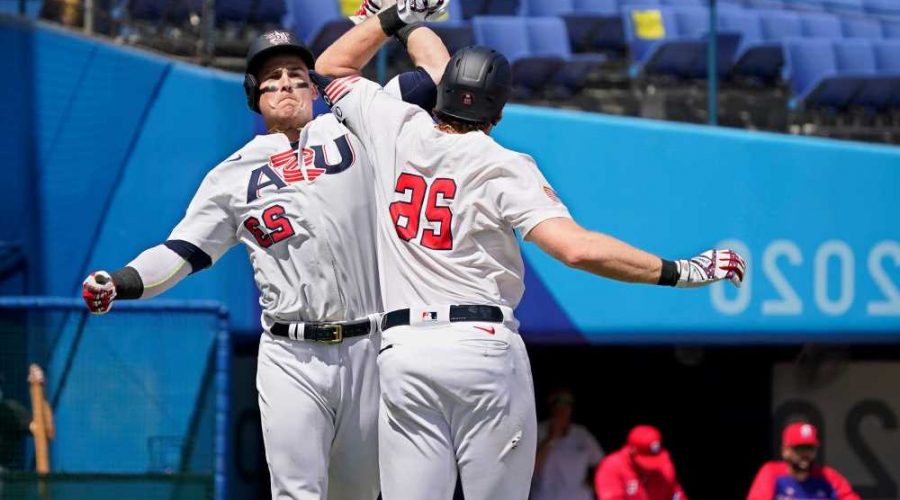 Neigh sayers: A ‘spooky’ statue is freaking out the Olympic horses

The United States is closing in on its second Olympic baseball championship.

Red Sox prospect Triston Casas hit a two-run home run and former Yankee Tyler Austin added a solo shot Wednesday as the U.S. beat the Dominican Republic 3-1 in Yokohama, Japan, to move one win away from the gold medal game at the Tokyo Olympics.

The Americans will continue to claw their way toward gold on Thursday when they face South Korea in the semifinal. The South Koreans lost 5-2 to Japan in Wednesday’s other game as the host nation — the only undefeated team in the field — moved into Saturday’s gold medal game.

Should the United States (which blew a three-run lead and fell just short to Japan in extra innings on Monday) lose to South Korea, it will battle it out with the Dominican Republic for bronze earlier Saturday.

Twins prospect Joe Ryan is expected to be the starting pitcher for the U.S. on Thursday. Shortly after he was traded from Tampa Bay to Minnesota, Ryan was named to Team USA’s Olympic roster and made his first start at the WBSC Baseball Americas Qualifier. In that game, Ryan struck out 10 Dominican Republic batters, allowing three runs on four hits over 4 ²/₃ innings of a no-decision in an eventual 8-6 victory.

The U.S. defeated South Korea 4-2 in the Group B opening round on July 31, with Casas going 1-for-4 with two RBIs. South Korea then went on to pick up convincing wins over the Dominican Republic in Round 1 and Israel in Round 2, outscoring both opponents by a combined 15-4, before losing to Japan in the semifinal.

The last time baseball was an Olympic sport, 2008 in Beijing, the South Koreans won the gold medal. That same year, Japan lost to the U.S. in the bronze medal game.

South Korea has posted strong pitching throughout the tournament. Heading into its matchup with Japan Wednesday, the team’s 3.44 ERA ranked second in the field behind the U.S.

The United Sates has only won Olympic gold once, in the 2000 Sydney Games, when they defeated Cuba 4-0. Now, they’re just two wins away from accomplishing the same feat.

Against the Dominican Republic, veteran southpaw Scott Kazmir, a first-round draft pick of the Mets in 2002, pitched five scoreless innings to shut down a loaded lineup that features former MLB All-Stars Jose Bautista and Melky Cabrera. Kazmir held the D.R. to just two hits and a walk, striking out five of the 19 batters he faced in his first appearance since a July 18 exhibition game.

Kazmir (1-0) escaped a bases-loaded, one-out jam in the first. The 37-year-old retired 14 of his final 15 batters around Bautista’s leadoff double in the third inning.

“I felt like I still had a lot in me,” Kazmir said.

Austin, a former major leaguer playing in his home ballpark of the Central League’s Yokohama Bay Stars, hit a solo home run in the fifth off Gabriel Arias. It was his second homer of the tournament, to go with a .412 average and five RBIs.

Casas, a 21-year-old first baseman at Portland, Maine, homered — off his Red Sox Double-A teammate Denyi Reyes — following a one-out walk to Austin in the first. Cassas is batting .313 with eight RBIs in the Olympics.

“At the end of the tournament,” Casas said, “nobody’s going to remember really how many home runs I hit or how many runs I drive in. It’s just whether we came home with that gold.”