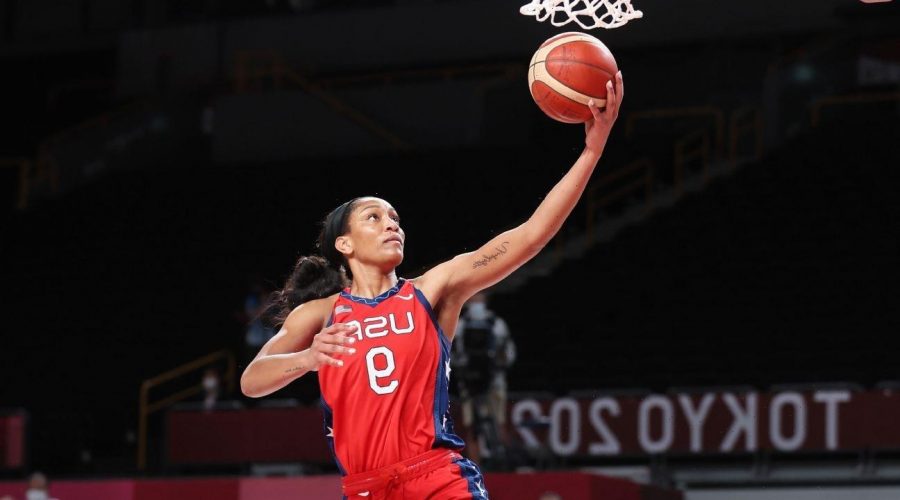 Mechelle Voepel covers the WNBA, women’s college basketball, and other college sports for espnW. Voepel began covering women’s basketball in 1984, and has been with ESPN since 1996.

The old adage that it’s not how you start but how you finish might be true, but the U.S. women’s basketball team will be looking for a stronger beginning entering the medal round at the Tokyo Games.

The Americans won their 52nd consecutive game in Olympic competition Monday — topping France 93-82 in the teams’ last game of Group B play — but this was far from some of the comfortable wins that have characterized many of Team USA’s preliminaries over the past several Summer Games. Credit the rest of the world for improved play, for sure. But it seems like the Americans still aren’t fully in sync in Japan.

That has especially been true of the first quarter. In their three group games, Team USA trailed 20-17 after the opening period against Nigeria, 30-28 to Japan and 22-19 to France.

All turned into victories, but the U.S. women are playing with fire. They can’t afford to get burned from here on out if they hope to win a seventh consecutive Olympic gold medal. In the past, there were five preliminary games, but the format has changed so now there are just three. The Americans already had secured a quarterfinal spot with their first two wins in Tokyo, but they want to carry momentum into the medal round.

Technically they did, just because they still ended up winning by double digits. But France led briefly in the fourth quarter.

Here are five takeaways from group play for Team USA as we look at what’s working and what isn’t.

Can Team USA put together a better opening act?

So how much should the U.S. women be worried about their somewhat shaky starts?

“I don’t necessarily think it’s a slow start [by the USA], it’s just a fast start by other teams. We have to take their punch, and we just have to keep doing what we’re doing.”

Understandable. But the fact that it happened in all three games is worrisome. The Americans were outscored in the first and third quarters on Monday, while they won the points battle in the second and fourth. France kept it close until the final minutes.

Maybe there’s no such thing as great defense every second of the game, but the U.S. women’s defense at times in all three games has been subpar, despite having two former WNBA Defensive Player of the Year award winners. Sylvia Fowles has won that honor three times, and fellow center Brittney Griner has won it twice.

But France exploited some of the Americans’ weaknesses, including when they weren’t getting much pressure on the ball and were allowing the French to get shots they wanted. The U.S. defense looked a lot sharper in the second quarter, but that has been part of this tournament: You see flashes and even stretches of the aggressive, dominant defensive team that the United States can be. But there are also lapses that have to be frustrating for Staley to see — and for the players themselves to see.

Players have talked even going back to their two exhibition losses in Las Vegas — one in the WNBA All-Star Game — about the necessity of communication on the court and how that’s the biggest factor on defense. It’s still something they are figuring out.

Inside job living up to expectations

We knew the U.S. women’s biggest strength would be their interior players, but they have been even more impressive than perhaps expected. Forward A’ja Wilson, playing in her first Olympics, led the Americans in scoring again with 22 points. She had 19 vs. Nigeria in the opener and 20 against Japan.

Charles, the leading scorer this season in the WNBA at the Olympic break (26.3), wasn’t a 3-point shooter when she came to the pros, making just 2 of 17 attempts from behind the arc over her first six seasons. That has changed dramatically. Since the 2016 season, she has made 117 of 364. And in some tense moments Monday, Charles’ ability to hit from long range really boosted the U.S. offense.

Guard play has room to grow

Starting guard Diana Taurasi suffered a wrist injury in the first quarter. Although she was able to come back into the game in the second quarter, she took only two shots. Fellow starter Bird, whose shot has been off in this tournament, took just three.

And with Skylar Diggins-Smith limited to 5.5 minutes and Atkins not seeing the floor at all, two of Team USA’s top perimeter defenders weren’t able to make an impact. In all, while the Americans knew this would be a post-dominant team, they would surely like to see better play all around on the perimeter going forward.

Are the rotations a concern?

College coaches will tell you that by NCAA tournament time, the bench gets shorter. It can be that way during the Olympics, too.

So sometimes no matter how much Staley goes into a game hoping perhaps to utilize her whole team, it’s not realistic. Especially not in a close game like Monday’s. In addition to Atkins not getting into the game, fellow Olympic rookie Napheesa Collier also didn’t see any minutes.

Staley acknowledged that she has tended to lean more toward players who have more experience in the Olympics, although Wilson is an exception.

“Substitution patterns and rotations — it’s hard,” Staley said. “You tend to stick with the players that have done it.”

02/08/2021 Sport Comments Off on U.S. womens basketball advances to quarterfinals but still isnt in sync at Tokyo Games
Lifestyle