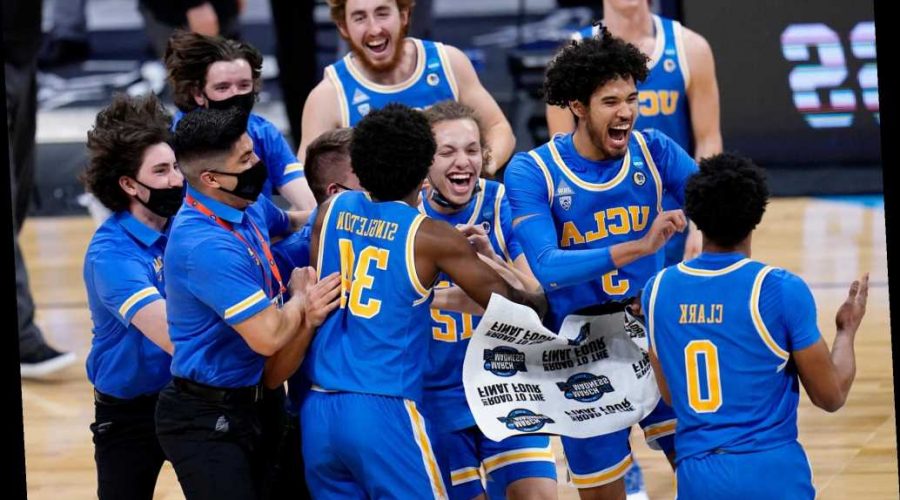 RJ Barrett becoming everything these Knicks stand for

Creighton can relish return to Sweet 16 — for now

Lesser young men, lesser teams, would have had their hearts ripped out by a last-second desperation 3 that had forced overtime.

But these underdog UCLA Bruins, the 11 seed from the mighty Pac-12, had much too much heart in the perfect place to have all that heart, Hinkle Fieldhouse, to have their heart ripped out.

The Bruins, 88-78 East Region upset winners in a white knuckler of a nail-biter over second-seeded Alabama, are the second First Four team to reach the Elite 8. Michigan is next.

After they were finished dousing each other in the locker room with water, Jaime Jaquez said: “We definitely believed in ourselves even when no one else was or did.”

Alabama was 4.2 seconds from elimination.

UCLA’s was 4.2 seconds away from its first Elite 8 since 2008 after Herb Jones had missed a pair of free throws with six seconds left and a clutch David Singleton canned a pair with those 4.2 seconds left.

Alabama’s Alex Reese took a pass from Jahvon Quinerly. The Bruins did not foul.

“My biggest concern was that when we went to foul, they were gonna shoot a half-court shot,” UCLA coach Mick Cronin said. “Obviously the kids bailed me out.”

Reese put up a prayer, over Cody Riley.

Elation on the Alabama bench.

Stunned disbelief on the UCLA bench … but only temporarily.

“You can’t let the other team want to win more than you,” Cronin said.

March Madness at its maddening best.

“We knew we had nothing to worry about,” Jaquez said. “This is March. Things like that happen all the time … we have another five minutes to try and win this game … we’ve been there before so it’s nothing really new for us … we knew we had to be the toughest team out there.”

UCLA’s leading scorer, Johnny Juzang, had fouled out with 2:27 left in regulation. Did not matter. Would not matter.

The Bruins scored the first seven points of OT and never looked back.

Jaquez hit a right-wing 3 with the shot clock winding down in OT to give UCLA a 77-70 lead.

“Those are definitely shots I practice at the park, just imagining being in March Madness,” Jaquez said.

They have become a reflection of Cronin, their passionate, pugnacious coach, who was cheered on madly again by his father and former coach Hep Cronin, and older brother, Dan. Remember, Cronin lost Chris Smith, a player of the year candidate, in January. Alabama, quicker and more athletic, made just 7 of 28 3s and was 11 of 25 from the free-throw line. UCLA was 20-for-25.

Dan Cronin, two years older, once the point guard at LaSalle High School, is hardly surprised by UCLA’s resurgence in his brother’s second season in Westwood. Listen to him:

“I was the star of the team, we were the best team in the league, the best team in the city, and he was stuck sitting behind me, because he played the same position as me,” Dan Cronin told The Post. “He couldn’t get on the floor as a sophomore. And he dealt with that adversity. He went ahead and played on the JV team, sat on the bench on the varsity team, kept his mouth shut, stayed focused, didn’t complain like a lot of kids would.

“The next year when I left, he ended up taking the team all the way into the districts and the regionals and was an all-city player himself, and was on the verge of just an outstanding career, when the last game of the season he blew his knee out.

“And, a lot of people would have quit at that point, because back in the late ‘80s, early ‘90s, knee surgeries were a big deal. You didn’t bounce back in six or eight months back then. And they carried him off the floor the last game of the year at the end of February, and everybody thought, ‘Well, he’s done for his whole senior year, because there’s no way he can come back that fast.’ And not only did he come back, he played every single game of his senior year and he limped around, it was hard to even watch, honestly, trying to play. But he was just not gonna let his school down, he was not gonna let his dad down who was the coach, he was not gonna let people down. And so he played his whole senior year basically with one leg. It would take him two or three days to be able to walk after the game, and he never sat out a game.”

Mick Cronin didn’t need The Walton Gang to win this game. He needed cold-blooded defense, and physical and mental toughness, and resilience, and will to win, and he got loads of all of it.

The Bruins are no longer in ruins.

“We’re not finished yet,” Jaquez said.