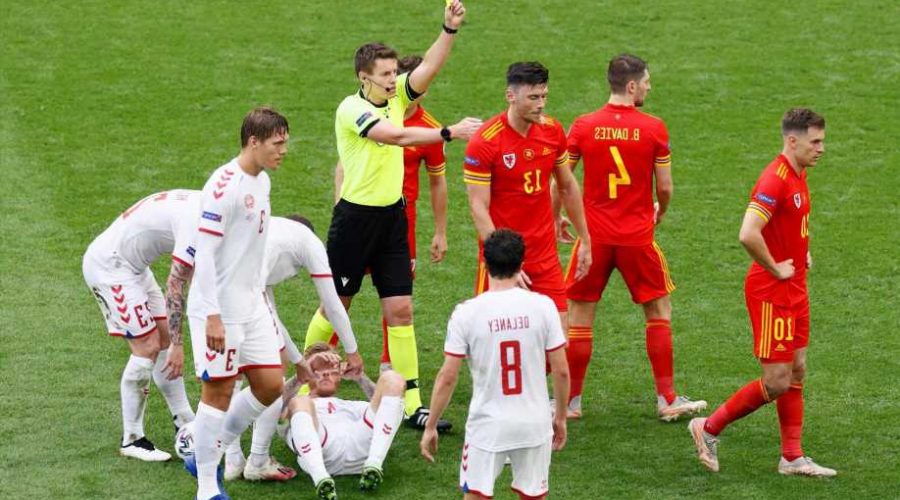 KIEFFER MOORE was ruled out of Wales' potential Euro 2020 quarter-final with a yellow card against Denmark.

The Cardiff forward was enjoying a good tournament with Robert Page's side before Saturday's last-16 game.

But, in the first-half and with the Danes a goal ahead, he picked up his second booking of the Euros.

Moore went up for a header against Simon Kjaer and was judged to have fouled the centre-back by referee Daniel Siebert.

It meant he will have to sit out any Welsh appearance in the quarter-finals.

The 28-year-old had netted the equaliser in Wales' opening group game against Switzerland, his sixth goal for his country.

Earlier in the same game, he had picked up his first yellow card of the competition.

Moore then started on the bench for the match with Italy, coming on after an hour, to help ensure he was not suspended for the last-16.

In a difficult first period in Amsterdam for the Dragons, Kasper Dolberg put Denmark ahead with an accurate finish from 20 yards out.

Connor Roberts was forced off injured shortly after the goal after hurting his groin while stretching for the ball.

The right-back failed to run off the issue and was replaced by Neco Williams.

Whoever qualifies from Saturday's last-16 tie will face the Netherlands or Czech Republic in Baku next weekend.