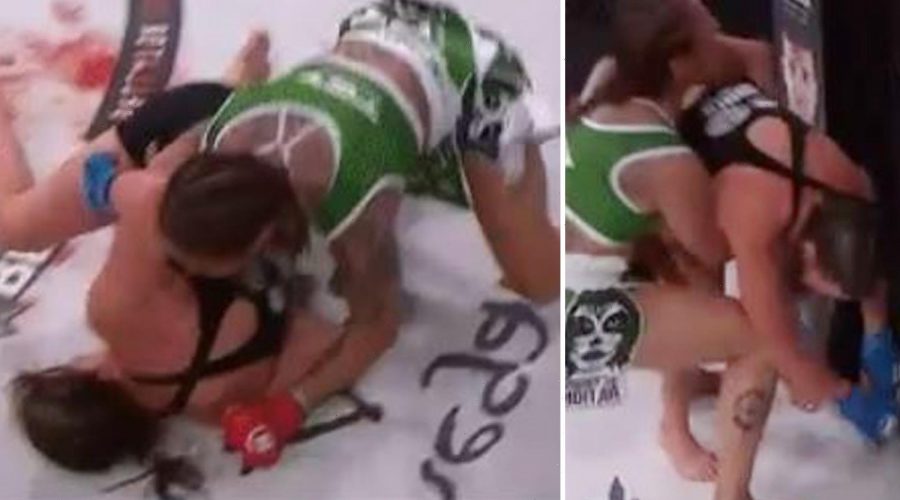 CRIS CYBORG pulled off a spectacular suplex in her Bellator 259 victory over Leslie Smith on Saturday morning.

Cyborg – real name Cristiane Justino – turned in a dominant display before stopping The Peacemaker late in the fifth round.

But the Brazilian pulled off a remarkable feat of strength by suplexing her opponent over her shoulder in the first.

With a badly hurt Smith seeking respite on the fence, Cyborg secured double overhooks and took the 38-year-old for a ride.

Fans watching at home were blown away by the slam with one saying: "Cyborg Nation got a suplex city."

Another said: "What a fighter."

And another said: "Ofc (of course) there’s technique to this but the strength you also need from that position is immense.

"Cyborg does is with EASE!"

One remarked: "Something I never thought I would see from Cyborg."

Cyborg, 35, finished Smith with a brutal barrage of ground-and-pound after dropping her with a big overhand right.

After the stoppage, she said of Smith: "I really respect her; she's a real fighter.

"I worked really hard and I knew with her we could do a great match, because she keeps going. She's tough."

Cyborg has now set her sights on a clash with fellow former UFC star Cat Zingano.

The four-promotion world champion said: "I've been 16 years doing this.

"I've got four titles in my career. And before you can be a GOAT, you have to stop running from the Cat.

"So I'd like to see Cat Zingano fight me for the next match."

Despite being deep into her thirties, Cyborg has shown no sign of slowing down.

And the Chute Boxe standout doesn't intend to hang up her gloves anytime soon, telling SunSport: "I didn't think about that or how long [I'll keep fighting].

"But I don't believe it's going to be like six years again. No, it's gonna be like short for sure.

"But you know, I always take care of my body. I went to Colombia a couple of times to do stem cell [treatment] on my injuries.

She added: "[My goals] are to enjoy every time I step into the octagon. I'm not going to have a lot of years [left]. It's been 16 years doing this.

"For me, [it's about] enjoying the moment and using my experience when I fight the girls.

"I think you guys saw with my last fight with Julia Budd or Arlene Blencowe a different Cyborg. I think I'm getting better every time I step in the cage."