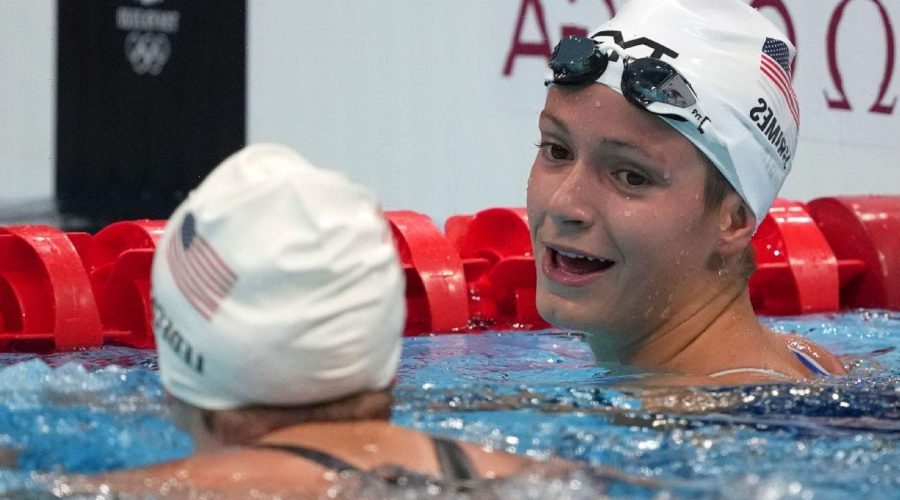 American Sunisa Lee is the women’s all-around gymnastics champion at the Tokyo Olympics. With Simone Biles out of the competition, Lee held off Brazil’s Rebeca Andrade. The United States holds the medal lead with 38, 14 of which are gold. China is right behind with 31 medals but the most golds at 15.

Elsewhere, the late-night crowd was treated to the first round of the men’s golf tournament, which, after some delays, has a tight leaderboard that is topped by Austrian Sepp Straka.

In the pool, Team USA resumed its quest for all the hardware, with Caeleb Dressel winning the 100-meter freestyle, his second gold medal of the Olympics, and Bobby Finke delivering one of the finest finishing kicks in American swimming history to triumph in the 800-meter free. Not to mention, the U.S. women’s 4×200-meter free relay team earned silver in the fastest women’s 4×200 race in the history of the sport. Dressel, along Katie Ledecky and Katie Grimes, were back in the pool Thursday morning.

Miss anything? We’ve got it covered.

Speed in the pool

Another morning and more swimming heats. The men raced the 100-meter butterfly and 4×100-meter medley. The women raced the 800-meter freestyle and 200-meter backstroke.

In his heat of the 100-meter butterfly, Dressel powered to an Olympic record. Rhyan White and Phoebe Bacon finished on top in the 200-meter backstroke heat.

Austria’s Sepp Straka was in the very first group out in the men’s golf competition, on the tee bright and early at 7:30 a.m. local time. Let’s just say tournament organizers don’t often put the big names out first, so it’s safe to say nobody saw what was coming. Straka, ranked 161st in the world, posted a bogey-free 8-under 63 to take the first round lead, one ahead of Thailand’s Jazz Janewattananond.

But there must have been something about being first off. Thomas Pieters was in that same first group with Straka, and the 116th-ranked player shot 6-under 65 to settle into third place through the opening round.

Looking for some more recognizable names? Last-minute Team USA add Patrick Reed opened with 68, as did Xander Schauffele. Right behind them, at 2 under, are Open champion Collin Morikawa, Masters champion and home-country favorite Hideki Matsuyama and Rory McIlroy. Clearly, the golf was there to be had — only 13 players in the 60-person field shot a score over par. — Nick Pietruszkiewicz

Dressel wins gold in the 100 free

American swimmer Caeleb Dressel earned his first individual Olympic gold medal after a close finish in the 100-meter freestyle at 47.02 seconds, an Olympic record. He beat 2016 Olympic champion Kyle Chalmers by six-hundredths of a second.

“Right now, I am just kind of hurt. It’s a really tough year,” an emotional Dressel said in poolside interview afterward. “It’s really hard. To have the results show up — I am happy.” — Aishwarya Kumar

The first-ever Olympic men’s 800-meter freestyle event will be remembered for a long time, as the United States’ Bobby Finke, who was not in the top three in the final turn, sprinted the last 25 meters to take the gold at 7:41.87. He became the first American man to win a distance freestyle gold since 1984. — Aishwarya Kumar

Katie Ledecky anchored Team USA to a silver in a stunning women’s 4×200-meter freestyle relay race in which all three medalists broke the previous world record. China won the gold medal by four-tenths of a second over the United States with a time of 7:40.33 to the Americans’ 7:40.73. Australia, the favorite going into the race, took bronze. — Aishwarya Kumar

The United States men’s synchronized springboard diving duo of Andrew Capobianco and Michael Hixon were in sync in a way that would make Justin Timberlake, Lance Bass & Co. proud, as they showed out to grab silver.

The United States beach volleyball duo of Kelly Claes and Sarah Sponcil didn’t waste much time taking out Kenya’s Brackcides Khadambi and Gaudencia Makokha, cruising to a 21-8, 21-6 victory to move to 2-0 in Pool D play.

The first round of Olympic men’s golf has teed off in Tokyo, and Japan’s favorite son, reigning Masters champion Hideki Matsuyama, is going for gold in his home country. And it seems like he’s ready to roll.

Meanwhile, the Team USA contingent has a superfan, one who has won a gold or two in the past.

Sing it loud, sing it proud

The Fiji men’s rugby team is pretty darn good at what it does, as it proved by beating New Zealand 27-12 in the rugby sevens gold-medal match. But the Flying Fijians have versatility, as they busted out in song to celebrate their gold. Seriously, they could book a gig at the next Catalina Wine Mixer.

Do you even lift, bro?

China’s Shi Zhiyong certainly does. Zhiyong, who competed in the 73-kilogram class, broke his own world record with a lift of 364 kilograms (802.48 pounds) en route to winning the gold. Not only that, Shi added some flair to his lift.

Who says there’s no emotion in badminton? Not us, and certainly not Guatemala’s Kevin Cordon, who gave us a perfect display of what the Olympics means with this reaction to upsetting Hong Kong’s Angus Ng Ka-long.

29/07/2021 Sport Comments Off on What you missed in Tokyo: The Katies (Grimes and Ledecky), Caeleb Dressels 100m gold, Sepp Straka leads in golf
Lifestyle