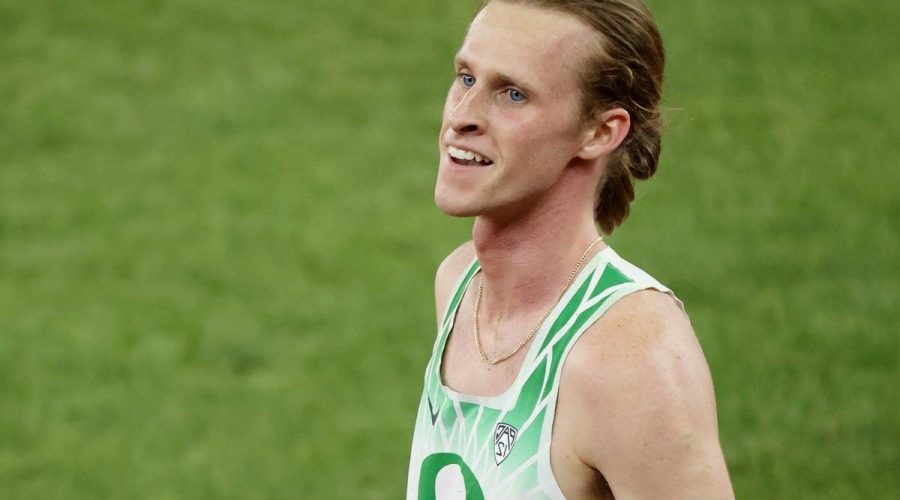 Cole Hocker begins his Tokyo 2020 campaign on Tuesday in the 1,500m first round heats.

The Oregon athlete has enjoyed a historic year racing for his college and upset the defending Olympic champion Matt Centrowitz at the United States Olympic Trials.

The 20-year-old has quickly emerged in 2021 as one of the sport’s most entertaining runners with his trademark kick enough to pick up some famous victories down the home straight.

Hocker, who has not been vaccinated for Covid-19 and contracted the virus in recent months without symptoms, joins Centrowitz in Tokyo alongside Yared Nuguse on Team USA with his campaign beginning on 3 August in the morning session at the Olympic Stadium.

His Round 1 heat begins at 1:05am BST (9:05am local time), live on Discovery+, and features the favourite for gold in Kenya’s Timothy Cheruiyot, while Great Britain’s Josh Kerr and Australia’s Oliver Hoare are other notable contenders in the same heat – which will see the top six automatically qualify for the semi-finals, though the next six fastest across the three Round 1 heats will also make it.

Hocker did not automatically qualify as the winner of the US Olympic trials at Hayward Field, his home stadium for his college Oregon, due to not possessing the Olympic standard (3:35.00).

The youngest runner in the 1,500m field, Hocker is the fourth favourite for gold, according to the bookmakers, priced at 20/1 behind the clear two favourites Cheruiyot (8/11) and Jakob Ingebrigtsen (9/4), with Kerr (18/1) the third favourite.

He is also the youngest American in the event since 1968 when Marty Liquori.

The only slight concern over Hocker’s chances is the heavy schedule over the last seven months, including 23 races, compared to Centrowitz’s 11 outings. The heavy schedule has built a winning habit though, with wins in the NCAA Division 1 indoor mile and 3,000m along with his outdoor 1,500m title to edge out Nuguse – another collegiate athlete at the Games with Notre Dame, while he still had enough in his legs to finish fourth in the outdoor 5,000m.

Part of the hype surrounding Hocker was a perceived rivalry with Centrowitz, who he pipped on the line at the Trials, adding a finger to his lips in a message towards his critics. Cole Hocker and Matthew Centrowitz react after competing in the Men’s 1,500m at the U.S. Olympic Track & Field Team Trials

But Hocker maintained afterwards that there is mutual respect between the pair, who will now represent the stars and stripes in Japan, going as far as to say it was an “honour” to race the Rio 2016 gold medalist with the respect reciprocated, though Hocker maintains that he “hates everybody” once the gun goes off.

Despite the enormous potential, Hocker’s primary goal is simply to make the final, with only five Americans able to advance that far in the previous five Olympics.

“The final is what everyone sees,” Hocker told Runner’s World. “People who don’t pay attention to our sport don’t know that there are two races leading up to the final.”

“Once I’m in the final, I have just as good a shot as anybody to get a medal. If I don’t make this one, then I’ll only be 23 at the next Olympics. I’m still young.

“You never know what could happen in the next three or four years. I better take advantage of this opportunity right now because it might not come again.”

02/08/2021 Sport Comments Off on Who is Cole Hocker? Team USA runner continues meteoric rise in 1,500m at Tokyo Olympics
Lifestyle