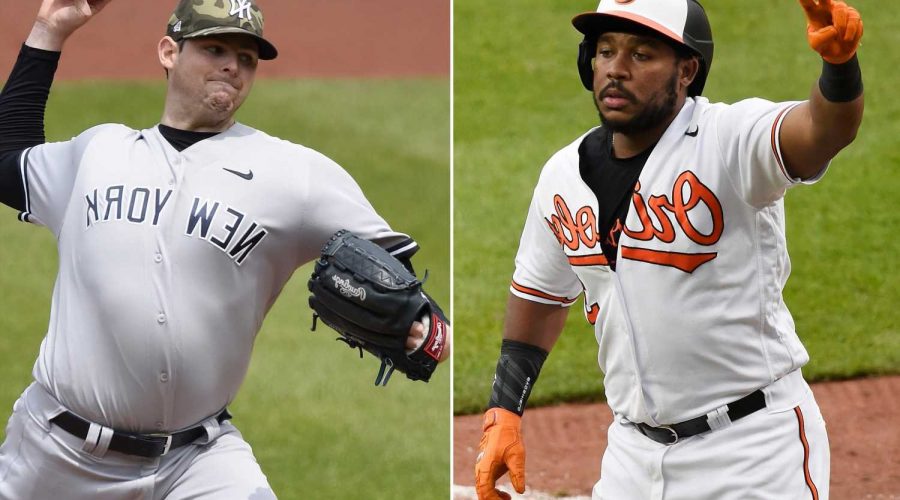 Yankees need their leader to keep playing like this

BALTIMORE — A four-run lead in the first inning against an Orioles team that had lost four in a row and seven of eight seemed like a sure recipe for another Yankees win.

But Jordan Montgomery turned in his worst start of the season and the Yankees’ bats went silent after the third inning, resulting in a 10-6 loss at Camden Yards on Sunday.

It was an improbable turn of events for the Yankees, who had played well of late and had won six of seven heading into Sunday.

A day after they scored three runs in the top of the first, the Yankees loaded the bases with no out against Adam Plutko before Gio Urshela hit into a double play that drove in DJ LeMahieu.

Gary Sanchez followed with a two-run home run to left, his fifth of the season.

The struggling Clint Frazier then homered to left-center, his fifth of the year.

Though Montgomery was armed with a four-run lead, his first-inning issues continued.

He retired the first two batters before walking Trey Mancini. Ryan Mountcastle doubled to right to drive in Mancini and a single to center by Pedro Severino scored Mountcastle to cut the Yankees’ lead to 4-2.

With two on, Montgomery got Freddy Galvis swinging to end the 33-pitch inning and settled down for an easy second.

Aaron Judge pushed the Yankees’ advantage to 5-2 with his fourth homer of the series with one out in the third off Bruce Zimmermann. This one went an estimated 443 feet.

But Zimmermann shut down the Yankees after Judge’s blast. He didn’t allow another hit until Tyler Wade’s single with two outs in the seventh.

Austin Hays led off the bottom of the inning with a double down the left field line and moved to third on a Montgomery wild pitch. Mancini walked and Mountcastle hit a sacrifice fly to left to make it 5-3.

Mountcastle moved to second on another wild pitch by Montgomery. That allowed him to score easily on Maikel Franco’s two-out double to right and the Yankees’ lead was cut to one run.

An RBI single by Freddy Galvis tied it at 5-5.

Michael King replaced Montgomery after the third. It was Montgomery’s shortest outing of the season.

King gave up a pair of doubles in the fourth, including one to Mancini that scored Cedric Mullins to give Baltimore its first lead of the game.

They fell further behind when Wandy Peralta, who had been very effective since arriving in a trade with San Francisco for Mike Tauchman, gave up a two-out, two-run homer to Franco in the seventh.

In the eighth, Luke Voit led off with a single before Judge walked on four pitches.

Left-hander Paul Fry entered to face Urshela and got the third baseman to hit into his second double play of the afternoon. Sanchez struck out looking to end the threat.

Baltimore tacked on two more runs in the bottom of the inning.

The Yankees got singles from Frazier and Miguel Adujar to open the ninth against Cesar Valdez, but pinch-hitter Brett Gardner flied to left and Mike Ford, also pinch-hitting, struck out. LeMahieu singled to drive in Frazier, but Voit whiffed to end it.