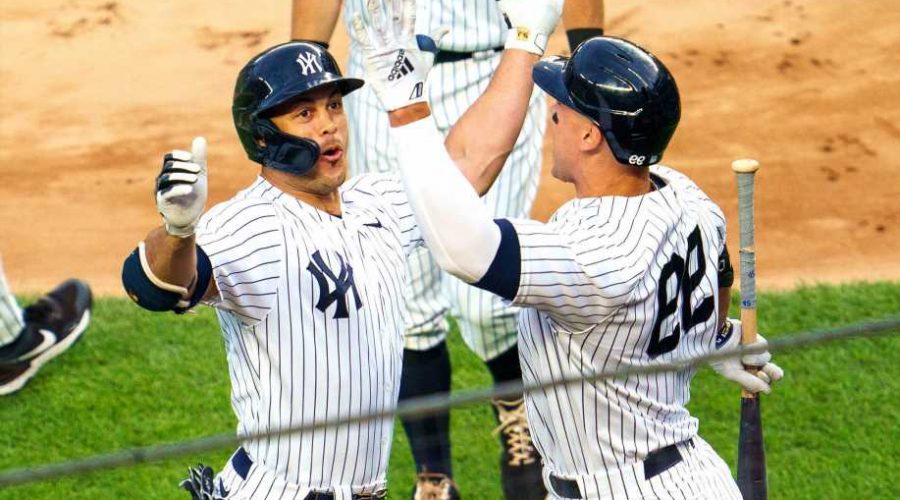 The next step in Yankee star’s return to Bronx

Bet on Zack Grienke, Astros to get better of Yankees

Yankees fans got what they came for in The Bronx Tuesday night.

They saw the Yankees get a modicum of revenge against Houston — and they got to scream at the Astros.

In the Astros’ first visit to Yankee Stadium since their sign-stealing scheme that led them to the 2017 World Series title became public, fans spent most of the night chanting “You’re a cheater,” “—hole” and — most of all — “F— Altuve.”

But there was some baseball mixed in and the Yankees took the lead for good in a wild bottom of the sixth.

Gleyber Torres led off the bottom of the inning with a walk and moved to second when Aaron Hicks grounded a single through the left side of the infield. After Kyle Higashioka grounded into a force out to put runners on the corners, Rougned Odor walked to load the bases.

DJ LeMahieu followed with a slow roller to third, where one of the night’s other primary targets — Alex Bregman — charged and made an errant throw to first.

Torres and Higashioka scored easily and Odor was waved home. Odor and Houston catcher Martin Maldonado got tangled at the plate. Odor scored, but was forced from the game with an apparent injury to his left leg, while Maldonado also exited.

Giancarlo Stanton’s RBI single — one of his four hits on the night — made it 7-3.

For much of the night, though, the game almost seemed a side note to the real action, which was the COVID-limited sellout crowd of 10,850 taunting the Astros.

The scandal cost manager A.J. Hinch and general manager Jeff Luhnow their jobs and the Astros organization a fine and lost draft picks, but the players emerged unscathed due to immunity granted to them by commissioner Rob Manfred for their cooperation in MLB’s investigation that ended in January 2020. That probe found the Astros had used an illegal electronic sign-stealing scheme during the 2017 World Series.

There was nothing the league could do about the fans Tuesday.

It started as soon as the gates opened about two hours before the game, as fans — deprived of a chance to vent their anger due to the pandemic last season — made up for lost time.

While some fans were ejected with various props — like inflatable garbage cans — none were thrown on the field.

The lead-up to the series led to many questions of both the Yankees and Astros about what was justified and what wasn’t, particularly since most of the guilty parties aren’t in Houston anymore.

“It’s not my place to tell fans how to react,’’ Aaron Boone said before Tuesday’s game. “I know we have as passionate a fan base as there is in our sport and I’m sure they’re aware a very good team is coming in to play us.”

As for the game, Bregman homered off Domingo German in the first, but the Yankees responded with three runs in the bottom of the inning against Zack Greinke.

The first five batters reached against Greinke, highlighted by Stanton’s two-run homer after LeMahieu led off with a walk.

Judge, serenaded with an “MVP” chant throughout the night — in reference to finishing second to Jose Altuve in 2017 — walked. A single by Gio Urshela and a walk to Torres loaded the bases before Greinke recorded an out.

Clint Frazier hit into a double play, scoring Judge to make it 3-1 and Hicks grounded out to end the rally.

Michael Brantley got the Astros closer when he crushed a solo shot deep into the second deck in right, cutting the Yankees’ lead to 3-2. And they tied it with a Yuli Gurriel RBI double off the top of the wall in left.

Greinke didn’t allow a hit after the first and retired 11 of the final 13 batters he faced. But he lasted just four innings, leaving after 84 pitches with the game tied.