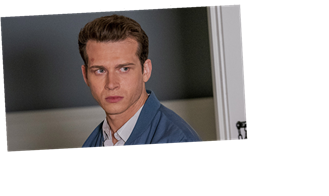 9-1-1 fills in the blanks on the hot-headed firefighter’s past on Monday’s episode, the latest from the 118 to have an origin story told in “Buck Begins.” Following last week’s hour, which ended with Buck finding out he had a brother he didn’t know about (but Maddie did), the timing for this episode couldn’t come at a more striking moment. In the aftermath of the jaw-dropping revelation, Buck finds himself at a crossroads as he learns the truth about how he came into this world, what happened to the brother he never knew and the relationships — most notably with his parents — that were forever changed as a result of the family’s incalculable loss.

“I heard rumblings of it over the summer,” Oliver Stark tells ET of when he first heard about the sibling twist., the scars of his childhood resurfacing. “We were on an extended hiatus because of the way of the world, but [showrunner] Tim [Minear] had called me and we had spoken about the possibility of a ‘Buck Begins’ episode in the past but with the agreement, ‘I’ll only do it if we find the right story.’ So when he called me and he had this idea, I was very excited by it. Because for me, it’s a reveal that makes so much of what we know of Buck fall into place and make sense. And suddenly, we understand why this character that we’ve come to know over the four seasons is the way he is. I was really excited to throw myself into it.”

There was a “pang of anxiety,” Stark admits, when he first got a hold of the script for this episode, mainly due to a self-imposed pressure to deliver. “The previous ‘Begins’ episodes have been so good. I felt like there was such a high bar to know, ‘All right, don’t be the one to drop the ball,'” he says with a chuckle.

“But the first time I read it, I got quite emotional actually because I’ve played this character for almost 60 episodes now, so I’ve come to really find a real connection with him,” Stark says. “And so, to read this stuff — he’s a person who has become very real to me — and to read this part of his story, it was quite an emotional thing for me. And then more than anything, it was just like, ‘Okay, how do we bring this to life in the most authentic way and have people invested even more in the story that is Evan Buckley?'”

One of the biggest questions Stark was itching to dive into was the explanation behind Buck’s strained relationship with his parents, which was borne from their late son, Daniel, who died from childhood leukemia one year after Buck was born.

“The thing that has always been on my mind was the relationship with his parents. We’ve seen Buck almost die many times and end up in hospital, and we’ve never heard from them. And there have been, over the seasons, the odd line thrown in about the relationship to them but then has never made it to air. So that to me, is a way of saying, ‘Oh, okay. They’re working out what this relationship is and they’re don’t want to have to commit to anything.’ So that’s been question for me,” he says. “And I’ve made guesses at it over the years, different assumptions. It was nice to finally meet them and get to play that out and have it all make sense a little bit.”

Watch ET’s exclusive sneak peek from Monday’s episode, featuring a flashback to Buck’s past when he lands once more at the hospital Maddie works at, below.

In the present day, Buck is in dire straits as he and the rest of the 118 respond to a five-alarm factory fire and he sacrifices his safety to try and save the last remaining victim stuck inside. As Stark explains, the parallels between Buck’s upbringing and the present situation he finds himself in inform just how far he’s come, even amid missteps, mistakes and TK over the years was the most rewarding.

“I think it was being able to almost mirror what he was going through in the emergency that the present day Buck finds himself on with what was going on in his life and what has always been going on in his life,” he says. “9-1-1 is always at its strongest when the emergencies that our first responders find themselves in are teaching them something about themselves, whether that be directly or indirectly. For him to have gone off on his own in the emergency, mirroring how he’s always felt alone in his life, and then having to end up saving this person, who, in my opinion, I regard as him trying to save himself as much as anything. And then to add another layer, have it be the A team step in and save his life and remind him that even though it’s not his immediate family or his family by blood, these men and women around him are as much of a family as he’s really ever going to need.”

On a lighter note, the episode sees Buck in various stages of his life, trying to figure out his place professionally and personally as he attempts to find his place. Getting to put on various hats, so to speak, was part of the charm of “Buck Begins,” Stark says. “It was really fun for me. It was almost like every time I put on one of the different outfits, it was like, ‘Maybe this is my identity. Maybe I love this. Maybe I just want to be a cowboy now.’ It was quite an explorative time for me as well, where I got to play dress up basically.”

“But it was important to show that Buck didn’t always have this direction. He wasn’t somebody who’s growing up to say, ‘I’m going to be a firefighter,'” he notes. “He had to try on these different hats. He had to try on these different iterations of himself before he found who he is, which I think is true for the majority of teenagers and 20-year-olds, even into their late 20s. People spend a lot of time finding themselves and Buck was very much somebody who knew he had a goal and knew there was a destination, but he just didn’t know how to get there to feel comfortable in his own skin.”