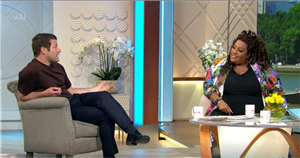 This Morning presenters Alison Hammond and Dermot O'Leary may be two of TV's best-loved stars, but they have admitted they had a frank chat about not being each other's biggest fans when they were first put together.

Alison and Dermot took over Fridays on This Morning from husband-and-wife presenting duo Eamonn Holmes and Ruth Langsford at the beginning of the year, but while their on-air chemistry may look natural to viewers, they revealed it took a lot of work.

"We were thrown together on a Friday a bit like an arranged marriage and it took about two months before we became comfortable."

Dermot agreed that the first two months together had been tough: "You know what it's like, when you start a show and you work with someone…you go out for lunch…we were on air in half an hour.

As Lorraine laughingly asked what they possibly couldn't like about each other, she was unprepared for the honest answer.

Alison said: "We told each other what we don't like, we were so honest and I think that's why it's worked.

"We had a few private chats and we said I don't like this about you, well I don't like this when you do this. They were really tiny things, but the fact we were honest and were able to talk to each other, I think that's why it's worked. I trust you now."

Dermot nervously explained: "Can I just go back, it wasn't like we didn't like each other! It was more like, oh I didn't know you were going to do that and it threw me.

"As soon as you have that honesty, now I can talk to you like I talk to my wife."

It sounds like things are a little happier now, as Alison said: "The things that I didn't like, now I love."

She joked: "I think I've brought out Dermot's personality, he was a bit dry before he met me."

Dermot added: "I think I've calmed her down, I was like, you don't need to start off the roof."

The X Factor host also revealed that one of the things he couldn't stand about Alison to begin with was her frequent looks to camera while he was talking, although he said he'd grown to appreciate it.

Alison told him: "That's what I do babes, you need to deal with it."