Warning: The following contains spoilers for All Rise‘s Season 2 premiere. Proceed at your own risk!

Surprise! All Rise‘s Season 2 premiere on Monday revealed that Lola is in the family way.

After being detained by the police while trying to help a young girl during a protest, Lola broke down in her bedroom in a flashback scene. She then approached the guest house where her husband was quarantining after traveling home from his job on the East coast. But rather than telling Robin about the horrible incident she experienced, Lola dropped a different bombshell on him: she’s pregnant! As the episode switched back to the present timeline, the baby bump that had been secretly and strategically hiding behind purses and whatnot was finally exposed.

As for how Lola feels about the unexpected turn of events, “she’s ambivalent about the news in the beginning, as you can tell,” co-showrunner Dee Harris-Lawrence tells TVLine, “but then it breaks through to be a blessing after telling her husband.”

That’s not to say that the pregnancy will be easy on Lola and Robin’s long-distance marriage. “Changes and choices will have to be made with both Lola and Robin as they adjust to parenthood and their high-demanding jobs,” Harris-Lawrence previews.

Elsewhere, Lola and Mark’s friendship took a big hit after he reacted insensitively to her being restrained by the cops. (Get scoop on that relationship here.) The incident also bled into Lola’s current courtroom case, with Lola’s opinionated new law clerk Ness (played by Glee‘s Samantha Marie Ware) adding her voice to the premiere’s discussion of racial issues and bias. “Whereas the first season was focused on Lola finding her voice as a judge, this season’s arc for Judge Carmichael [is about], ‘How will you use your voice in the wake of what is happening in the country, but even more specifically in Los Angeles, today?’” Harris-Lawrence says. 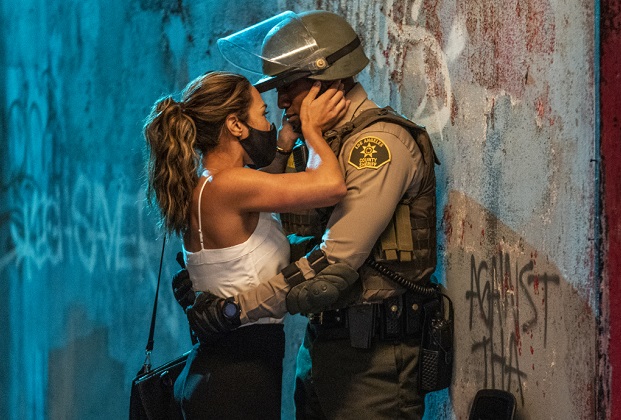 Then there’s the episode’s other big surprise: Emily and Luke are no more! Exactly what happened between the former couple that caused them to take time apart will be revealed in next Monday’s installment. Harris-Lawrence admits that “one of our exec producers practically had a heart attack when [co-showrunner] Greg [Spottiswood] and I presented” the idea of splitting up the fan-favorite pair, she shares. “But it was one of the first things we discussed when the writers’ room got together.”

“In the first season, Emily and Luke’s courtship happened while Emily was still dealing with some personal issues,” Harris-Lawrence explains. “And then suddenly the world shifted and changed. And Luke has made the transition from being a bailiff to the DA’s office. We’ll explore what these seismic shifts in society, and in their lives, do to their relationship. And [for] the [Emily/Luke] fans, I say, it will be a lot of push and pull that happens with them throughout the season. They still have to work together.”

In the meantime, Luke may have moved on with his DA’s office colleague Sam, who answered Luke’s door when Emily came over with the hopes of reconciling. So what exactly is going on between Luke and Sam? “A new term is coined — for me at least — that will describe/explain their relationship going forward,” Harris-Lawrence teases with a laugh. “Audiences love a good triangle, and we plan to give them one.”

All Rise fans, what did you think of the season opener? Grade it below, then hit the comments!