Filmmaker Brett Haley doesn’t trade in hip cynicism. The director of such low-key charmers as “The New Year,” “The Hero,” and “Hearts Beat Loud” is interested in telling stories about good-hearted people persevering in the face of tough circumstances. Even his happiest endings are tinged with a believable bit of sadness, but they are still just that: happy endings. His latest, the tender dramedy “All Together Now,” offers the usual Haley heartstring-tugging with some predictable Netflix sheen, but it also delivers the timely message that taking care of each other should never go out of fashion.

High school senior Amber Appleton (a charming Auli’i Cravalho who, of course, gets to sing) isn’t just a do-gooder, she’s a do-everythinger. She’s got a gig teaching ESL to a pack of older immigrants (mostly, they sing their new language), a job at an old folks’ home (where Carol Burnett’s delightfully crochety Joan lives), another job at a local donut shop (managed by a dude she just tutored through his GED accreditation process), and she appears to be her high school’s most reliable crusader for all manner of issues (from supporting the drama club to lobbying to make sure the marching band gets a new tuba). She’s always got time for her slightly different best friend Ricky (Anthony Jacques), and the rest of her clique seems to view her as the glue that holds them all together.

She’s also a very talented singer, with her eyes set on Carnegie Mellon University, her beloved father’s alma mater. There are a few impediments to that dream, which Haley and Cravalho deliver with a careful mix of grace and bluntness. Amber and her mom Becky (“One Day at a Time” star Justina Machado) are homeless, and Amber’s cheery outlook hides some deep pain and shame surrounding those circumstances. While some of the story elements feel a bit hammy — Amber is hung up on perfecting a song her late father wrote, called “Feels Like Home,” for instance — other touches are achingly real, like Amber’s inability to accept help from even her most pure-hearted friends.

Based on Matthew Quick’s novel of same name (Quick, Haley, and Marc Basch all contributed to the screenplay), “All Together Now” packs on the drama, layering traumas and complications on Amber until, quite frankly, they feel insurmountable. The film never lets go of its anonymous gloss — even Amber’s high school is idyllic in a way only seen in YA movies — and, despite some horrible twists of fate, it never turns into a Ken Loach drama. That’s not Haley and his seeming belief that even heartbreaking stories can get happy endings, as long as people are nice to each other, is as charming as it is aspirational. 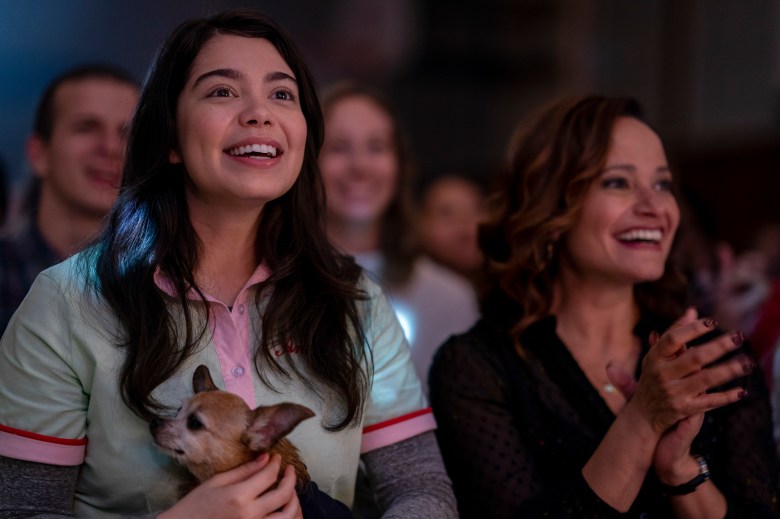 “All Together Now” isn’t cheesy, and much of that is due to Cravalho’s appealingly low-key performance that bypasses the most obvious choices in favor of building a character that feels lived in and real. The film starts in cutesy, almost cloying fashion, with Amber trilling soul songs with her ESL class and happily providing snacks to seemingly everyone within her vicinity (food, it seems, is her love language), but that facade is chipped away throughout the film’s running time. That’s the point: The face Amber — and many others like her — puts on in public obscures the private tragedies.

The film isn’t Haley’s first go-round with Netflix; it’s not even his first go-round with the streaming giant this year. He previously helmed the similarly emotional “All the Bright Places,” with slightly less success — and despite its heavier subject matter, this new one fits neatly inside the streamer’s growing library of YA dramedies. Amber has a cadre of diverse friends, a cute love interest (Rhenzy Feliz), an offbeat teacher (Fred Armisen), and the action builds up to the school’s variety show — all hallmarks of less-fraught movies that appear with regularity on the streamer.

“All Together Now” makes the argument that tragedies don’t have to be faced alone, and while there’s a dash of Pollyanna thinking to the entire affair, the film doesn’t gloss over the realities of Amber’s situation. Haley’s tender approach may not sting, but it does leave a mark. Yes, it has a happy ending, but the film also makes it clear that such conclusions are only the start.

“All Together Now” will be available to stream on Netflix on Friday, August 28.

26/08/2020 TV & Movies Comments Off on ‘All Together Now’ Review: Auli’i Cravalho Shines in Tender Netflix Dramedy About Taking Care of Others
Lifestyle