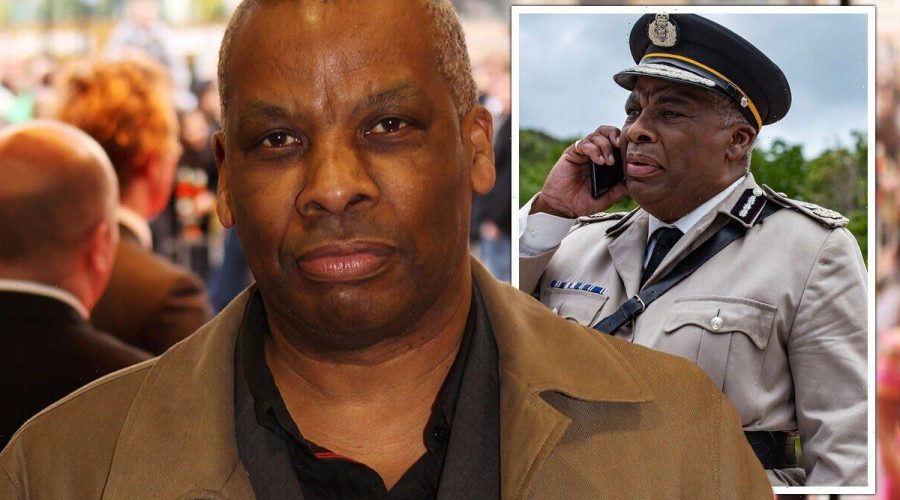 Ralf Little jokes about scene in Death in Paradise

Death in Paradise is back on BBC One and Selwyn Patterson is working on his relationship with his estranged daughter. The storyline that centres around his family and personal life has left fans keen to find out more about the actor’s life away from the Ralf Little series. Express.co.uk has all you need to know about Don Warrington’s wife.

Death in Paradise will see Selwyn meets his daughter as they try to find common ground.

Actor Don explained: “It’s a difficult situation when you meet your father or daughter, especially if you haven’t seen them before and as they are both adults.

“It is a huge bridge to build. It’s not always a smooth process and needs a lot of negotiating.”

Off-screen, he has two grown-up sons, Jacob and Archie, with Archie being an actor.

He had his sons with his wife Mary Maddocks, an actress and director.

Mary has been in the West End production of The Rocky Horror Show, following a successful career in the entertainment industry.

She has had guest roles in some big TV shows including Coronation Street, Midsomer Murders and Doctor Who.

As a director, she has led several stage productions, from plays to musicals.

She and Don have both been supportive of their son Archie’s acting career.

The actor, comedian and writer has starred in Miracle Workers and was a writer on the series Intergalactic.

Don opened up about his career success and why Death in Paradise has been a huge hit.

He said: “If I were to take a stab at it: it has comedy, drama and characters who are essentially loveable and are relatable to the audience in different ways and have more to them than their professions.

“I also think the interrelationships between the characters are special.

“Selwyn’s relationship to Neville, Marlon and now to other characters have evolved.

“The audience is interested in how those connections develop, that to some extent makes it a successful series.

“The formula for the show has a magical chemistry.”

His co-star Ralf Little branded him a “living legend”, saying he was lucky to work with him.

Ralf explained: “The show stands or falls on whether the audience takes them into their hearts.

“Every time I’m in a scene with him, I’m thinking about how lucky I am.”

The Trinidadian-born actor joined the series back in 2011 and has been a valued cast member ever since.

Death in Paradise airs on Fridays on BBC One at 9pm.