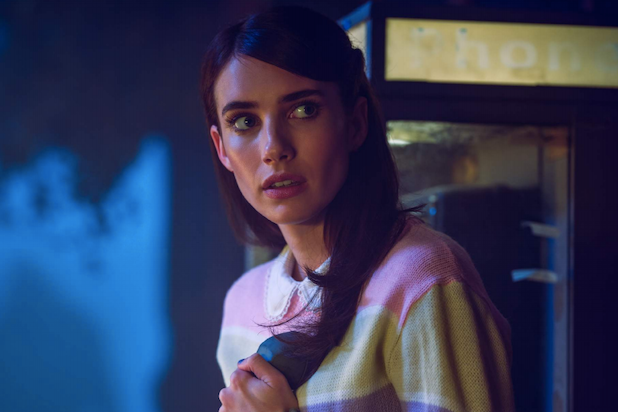 (This post contains spoilers for Episode 3 of “American Horror Story: 1984.” You have been warned.)

The premiere of “American Horror Story: 1984” felt a bit too mundane for “AHS,” and the second episode was maybe too crazy. The third episode this week, however, might have struck just about the right balance between those two extremes, packed with twists and turns but nothing that felt particularly confusing. But it was still a lot to process.

As it is, the third episode created for more new questions than it did answers. See below for our list of the biggest questions we have and check back next week to find out which ones have — and haven’t — been answered. Since we’re still early in the season, we don’t expect many big answers any time soon.

Before the end of the third episode, all the murders involved random characters popping into the camp for two minutes before one of the killers took them out, and we were kinda worried that trend would continue for a while. But it didn’t, and right at the end of the episode we see Ray (DeRon Horton) try to escape on a motorcycle before he’s smoothly decapitated by Mr Jingles (John Carroll Lynch).

But will he stay dead? Given the way we already had one character return from the dead multiple times, we can’t help but be suspicious about Ray’s fate here.

What in the world is the Night Stalker’s relationship with Montana, and what does Montana have against whoever she wants him to kill?

The big twist of the third episode was the reveal in the very last scene that Montana (Billie Lourd) was in cahoots with the Night Stalker (Zach Villa). And Montana demands to know: “Why the hell haven’t you killed her yet?”

Judging by the teaser for next week’s episode, we’re gonna get some answers pretty soon.

What does the Fake Rita actually want?

So it turns out that Rita (Angelica Ross) is actually not Rita, but rather somebody who told Mr. Jingles how he could break out of his cell so she could study him and find out what makes him murderous. This invites a whole host of other questions, like: was she really a doctorate student studying serial killers? Was she telling the truth when she explained to Mr. Jingles what she wanted to do? Do we actually know anything real about this character at all?

What in the world is going on with the hitchhiker?

So we’ve got this character (Lou Taylor Pucci) who keeps being killed — it’s happened three times so far, once in the premiere and twice in the second episode. He was murdered twice in quick succession by the Night Stalker (Zach Villa) this week, and he said weird things like, “you’re not supposed to be here” and “I don’t die here.”

And then, later, he runs into Margaret (Leslie Grossman) and we learn that his name is Jonas and he was a camp counselor when the previous massacre happened back in 1970 — he tried to escape the camp but was run down by Mr. Jingles (John Carroll Lynch). We don’t get any conclusions about what his deal is, but this feels like a pretty clear indicator that either something supernatural is going on or “1984” is gonna get meta like “Roanoke” did when it was revealed that that season was actually a TV show within a show. But we have no clue what the answer is. But judging by the comments he made to the Night Stalker, we feel like he knows more than he’s letting on about his current situation.

Did Margaret help with the massacre in 1970?

When Margaret and Jonas were trying to figure out what’s going on, Jonas said that the reason he ran was because he looked inside one of the cabin windows and saw her covered in blood. It seems likely that this scene just took place after the massacre had ended and Margaret got up from her hiding spot — since he got run over by Mr. Jingles as he was leaving the timeline would fit. But with how weird Margaret was acting in her scene with the Night Stalker we can’t help but wonder if there’s much more to her than we know so far.

What’s up with the Night Stalker, really?

So that twist ending of the third episode shed a little light on his motivations, but there’s still so much other weird stuff about him that we don’t understand. Case in point: that scene with Margaret (Leslie Grossman) in the second episode. They had never met before, but they just had this long scene where he asked her about how he could keep killing the same guy repeatedly. And Margaret acted very strangely in the scene, basically giving the Night Stalker a pep talk after he told her his life story and how he came to be a murderer. It was a completely unnatural interaction, and we assume that’s intentional and will be explored further in the future.

We should also note that the Night Stalker previously showed up on “AHS: Hotel,” the show’s fifth season, but was played be a different actor in that appearance. So we’re wondering how that bit will come back around, if at all, since “AHS” likes to play with its connections.

What was the point of Brooke’s insane wedding story?

Early in the second episode, Brooke tells Montana a horrifying story: A year ago, Brooke was going to get married, but her husband-to-be thought she had cheated on him with his best man. So at the altar he murdered his friend, her dad, and himself. There’s gotta be some reason to saddle Brooke with a backstory like that, but we didn’t find out what that reason is this week.

Side note: Brooke’s dad is played by Steven Culp, who is not the sort of actor you just drop into a scene like this as a cameo appearance and then never bring back. So it seems likely we’re going to get more Brooke backstory, with her dad making more appearances.

While we’ve seen flashbacks to the 1970 massacre, it’s unclear what made Mr. Jingles snap the night he murdered all those kids. Or, you know, if he’s just like that. But this is “AHS,” so we’re sure there’s more backstory here that will unfold as Margaret tries to reopen the camp.

Who is going to live and who is going to die?
It’s the standard slasher movie question that has to be asked about an “AHS” season that’s a tribute to slasher movies. Actually, this has to be asked about every season of “American Horror Story,” but we’re particularly worried about the fates of this crop of characters, considering the installment’s theme. In the second episode the only characters who died were interlopers, rather than any of the main people. Will that trend continue?

What’s the twist?
One of the big elements that makes “American Horror Story” interesting is that each season tends to contain some kind of major, game-changing twist. Last year in “Apocalypse,” for example, the show killed off most of the main cast a couple episodes in and transitioned into a crossover between “Coven” and “Murder House.” Back on “Roanoke,” they revealed midway through that we had been watching a reenactment of real events — a show within a show — before those real ghosts started going after the cast and crew of that meta-show.

Since it seems like it would be difficult to make a straight homage to ’80s slasher movies last ten episodes, we can’t help but assume that “AHS 1984” will feature some kind of similar change-up. And the stuff with Jonas the camp counselor who keeps coming back to life indicates that twist is going to be a doozie.

03/10/2019 TV & Movies Comments Off on 'American Horror Story: 1984' – The Biggest Questions We Have After the Third Episode
Lifestyle