A new ailment made Carrie feel old this week on And Just Like That…, while a new spark may have Miranda feeling young again.

While Carrie is showing Seema her old apartment, she has to use an umbrella as a cane just to walk upstairs. She says it’s just normal back pain, but Seema makes her see a doctor, who tells Carrie she has a congenital birth defect and needs hip surgery. Charlotte and Miranda volunteer to take care of her before and after her surgery, but Carrie’s most upset to hear she won’t be able to wear heels for months. Meanwhile, Charlotte gets a shock when she learns her daughter Rose is going by the name “Rock” at school and is using “they/them” pronouns. (In Rock’s defense, they did do a TikTok rap about it that explained everything.) Plus, Miranda receives a book from Amazon about quitting drinking and instantly suspects Charlotte sent it to her as a passive-aggressive jab. (In Miranda’s defense, that does sound like Charlotte.) 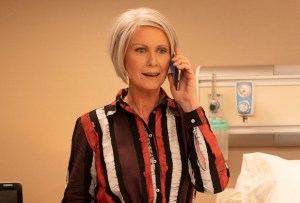 Miranda complains to Carrie (“She just Amazon-ed me!”) and insists she doesn’t have a drinking problem. She lights up, though, when Che stops by to visit Carrie, and the two of them share a meal and a laugh together. Carrie is on so many painkillers, she needs Charlotte’s help just to use the bathroom: “Well, this is a very special episode of Friends: ‘The One Where They Lower Her to the Toilet.’” After her surgery, though, she gets to be carried up to her apartment by one of Mario’s hunky Hot Fellas delivery guys, and the pain pills make her very loose-lipped on Che’s podcast. She even blabs about the time Samantha fished out her diaphragm for her. Charlotte warns her that she should probably give Samantha a heads-up about that. (What, like she would be offended? Samantha Jones doesn’t get offended — she offends!) 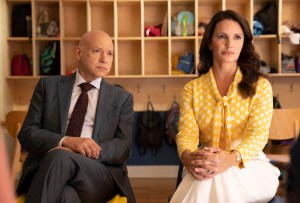 While Charlotte and Harry have an uncomfortable meeting with Rock’s teachers — Harry is still hoping this is just a phase — it’s Miranda’s turn to babysit Carrie, who’s taking a painkiller nap when Che stops by. Miranda fixes herself up before answering the door and happily cracks open the bottle of tequila Che brought, with the two of them taking shots and giggling together. Their hands brush against each other’s, and Miranda asks Che to give her another weed smoke shotgun. Che does… and then starts kissing Miranda’s neck (!). Soon enough, they’re full-on making out, and Carrie wakes up in a daze to see them.

Che even puts their hand down Miranda’s pants (!!!), with Miranda moaning loudly and later telling them, “That was the best feeling I’ve ever had in my life.” But back in her bedroom, with no one to help her to the toilet, Carrie is reduced to peeing in a Snapple bottle — which she promptly spills on her bed anyway. She confronts Miranda, and the truth comes pouring out of her: “I’m unhappy… I’m trapped. I hate my marriage. I hate it. I hate my life. I hate it.” She doesn’t want to quit drinking, and as for Che, “I don’t know if I want to quit that. I’ve never felt like that in my life.”

Miranda gets a wake-up call, though, when she realizes she ordered that book from Amazon herself while she was drunk — a realization that leads to her pouring all of her booze down the drain. Carrie does text Samantha about the diaphragm story, and Samantha actually replies, calling it “one of my finest hours.” (Ha!) But when Carrie texts that “I miss you,” we see Samantha start to write back — those three little dots! — only to stop herself and say nothing. Carrie later gets good news in the form of a hot young physical therapist named Travis who offers to treat her with “a deep lower body massage.” (When the receptionist informs Carrie her insurance doesn’t cover Travis, she quickly volunteers to pay out of pocket.) And soon enough, Carrie Bradshaw is back in high heels, as she should be.