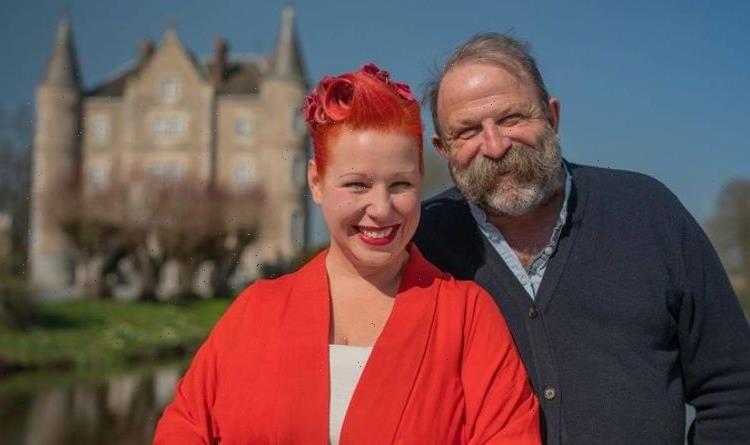 Escape to the Chateau: Angel cries over 'sweet' discovery

Escape to the Chateau follows the lives of married couple Dick Strawbridge and wife Angel Adoree, renovating the French 19th Century castle Château de la Motte-Husson. The series has been a resounding success with the couple getting themselves spin-off shows Escape to the Chateau: DIY and Make Do and Mend. The Channel 4 series also documents their personal lives, including the everyday troubles of juggling work with family life.

Does Angel Adoree’s mum live with her and Dick Strawbridge?

Angel was born in East London, South Africa where she lived with her parents Stephen and Jennifer Newman.

They lived abroad until moving to Canvey Island shortly after their daughter was born, where they ran a jewellers.

Despite moving to France, Angel has remained close to her family as she returned to Essex for the jewellery shop relaunch in 2017 as her brother Paul was taking over the business from their dad.

Upon getting the business in his name, Paul decided to relocate to a larger site.

The handover was made just a year after Escape to the Chateau first premiered on Channel 4.

Dick and Angel purchased the chateau in 2015 for just £280,000 and it wasn’t long before the channel started following their everyday lives.

The couple live in the castle with their two young children Arthur and Dorothy.

While Angel’s mum and dad don’t live with them in the chateau, they aren’t too far away.

Earlier this month, Dick and Angel spoke to presenter Zoe Ball on her breakfast radio show.

When asked if it was “tough” dealing with the pandemic, Dick explained how it hadn’t been easy.

He said: “It has been, interestingly, and it’s been a year and a half.

“It’s been very different. But the thing is, there’s always something to do.”

DON’T MISS…
Coronation Street’s Alina suffers miscarriage and it’s Hope’s fault? [SPOILER]
When does Meena get found out in Emmerdale? [EXPLAINER]
How much does it cost to tour the Escape to the Chateau home? [PRICE]

Dick continued: “So it’s not like we’ve been confined – there’s so much space and doing things with the children.

“We’ve been quite lucky, as a family I think we’ve come through it well.”

“Of course we’ve got Angela’s mum and dad living across in the coach house.

“So we’ve got a family unit here, which sort of has support, which is very lucky indeed.”

Escape to the Chateau: Make Do and Mend has returned for a new series on Channel 4.

The series will be running for six weeks with a new instalment airing every Thursday.

The original show will also be making a comeback but a release date hasn’t yet been announced.

Escape to the Chateau is available to watch on All4.

22/07/2021 TV & Movies Comments Off on Angel Adoree mum: Does mum live with Escape to the Chateau star and Dick Strawbridge?
Lifestyle