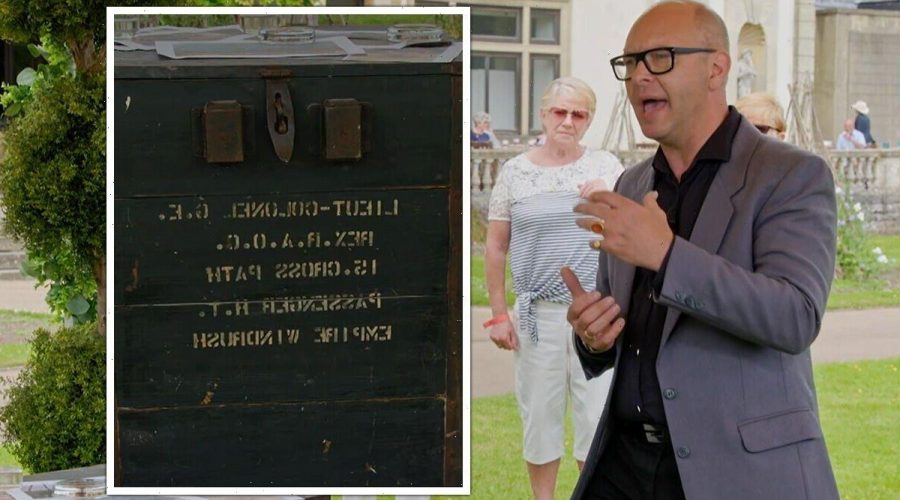 A vintage chest linked to one of the most important stories of migration in British history was presented to expert Marc Allum on a recent instalment of Antiques Roadshow. The chest belonged to a couple who found it gathering dust in one of their barns and they were intrigued to learn more about its history. Marc was amazed by the trunk and believed it would fetch hundreds of pounds at auction.

“As we can see it is stencilled Lieutenant Colonel GE Rex, RAOC. So that’s the Royal Army Ordnance Corps.”

When he asked his guests how they acquired the chest they admitted they found it in one of their barns at home.

One of the guests explained she has owned a farm with her partner for 15 years.

“It was there when we brought it but we didn’t realise it was there,” she confessed.

“When we brought it out into the daylight we found writing on it.”

She explained she gave it a dust and also found some items inside the trunk which included photographs.

Looking at the historic photographs Marc said: “I would say you have a mixture of what I would call personal and non-personal images here.

“We’ll come back to those in a minute but let us just go back to the stencil on the front because what really piqued my interests are the words Empire Windrush.”

He explained Windrush was a German ship which was commandeered at the end of the Second World War and it was called the Monte Rosa when it was in German hands.

It served through the Second World War as a troop carrier and was commanded by Kiel Canal in 1945.

“That is where the story gets interesting,” Marc explained.

“It was commandeered as a troop carrier and started to move, post-war, all our troops all around the world.

“One of the journeys it made was when it travelled to Kingston Harbour in Jamaica, and there were Caribbean people who wanted to go to the UK.

However, he said the Government was not keen on their arrival and they were later referred to as the Windrush generation.

One guest wondered how the trunk ended up in Wales and Marc said some of the pictures which were in the trunk looked as though they were a mix of wartime images and personal ones.

“I feel there is a lot more to come out of this story,” he explained to the guests and said he would research the colonel named on the trunk.

After a full inspection of the item, he told the guests the trunk could now be worth between £200 and £300 which surprised the couple.

Antiques Roadshow episodes are available to stream on BBC iPlayer.