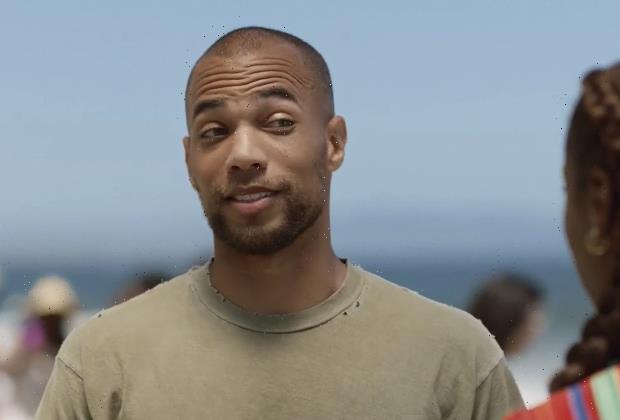 Warning: This post contains spoilers from this Sunday’s episode of Insecure.

Not even a salty, tear-soaked kiss could get in the way of love or whatever’s happening between Insecure’s Nathan and Issa — they obviously really like each other.

This Sunday’s episode saw the pair drop all pretenses and get real about how they feel each other. “I don’t wanna just be friends with you,” Issa tells Nathan, who shared the same sentiment. It’s a sweet progression forward after a lengthy back-and-forth.

“There was a moment between them at the end of Season 4 where she makes it clear she wants to be friends, and he was accepting of that,” Kendrick Sampson, who plays Nathan on the HBO comedy, tells TVLine. “Fast forward to a jump in time where they’ve reconnected and developed a friendship still with his underlying reluctance.” 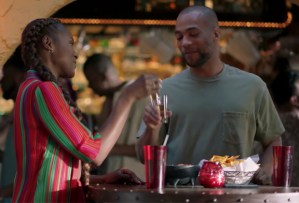 When Issa tried to reconnect with Nathan, their night ended in disaster: she was still emotionally vulnerable after breaking up with Lawrence and sobbed into Nathan’s mouth. He slipped out while she was asleep, leaving both unsure of where they stood with each other until their intimate conversation and subsequent kiss (which was interrupted by an earthquake’s aftershock).

“She doesn’t just cry in his arms; she cries in his mouth,” Sampson stresses. “It’s really awkward and he doesn’t know where they stand, and then he doesn’t handle it the ideal way, the way that he and a lot of people would have appreciated…. I think after not being able to get out the words, to express and truly showcase how much he has changed, he was at a point where he was just fed up and like, ‘Let me just be vulnerable and say what I got to say,’ and that landed on Issa.”

Moving forward, things between the couple are “gonna be uncomfortable and unpredictable in the same way that it always is,” Sampson previews. “You’re going to have incredible moments where you think we are right where you want us to be in the show, and then [there’s a] complete turn right. I can’t stress that enough. Every time you’re a little complacent, it’s not what you think.”

This week’s episode also featured an uncomfortable conversation between Nathan and his cousin Thomas, who revealed that he — and not his wife Velma — didn’t want Nathan hanging around his kids after Nathan had a manic episode. Nathan tried to convey how much he’s changed since being diagnosed with bipolar disorder, and Thomas apologized and invited Nathan to continue their conversation later. It didn’t exactly resolve things, but offers a unique opportunity for a more open dialogue.

“In this episode, you do see that he has grown, that he’s communicating better or at least making the effort to communicate better and be vulnerable and really prove himself. We haven’t seen that before in the show,” Sampson says.

Moments like these are what Sampson hopes to see moving forward, as well as how Nathan and Issa “grow and how they reveal new sides of themselves” in their relationship. The actor is also looking forward to “showing who Nathan is apart from Issa,” which he thinks “informs who [Nathan] is when he’s with Issa.”

Want scoop on Insecure, or for any other show? Email [email protected] and your question may be answered via Matt’s Inside Line.

15/11/2021 TV & Movies Comments Off on Are Insecure's Nathan and Issa Finally on the Same Page? Kendrick Sampson Teases 'Unpredictable' Times Ahead
Lifestyle