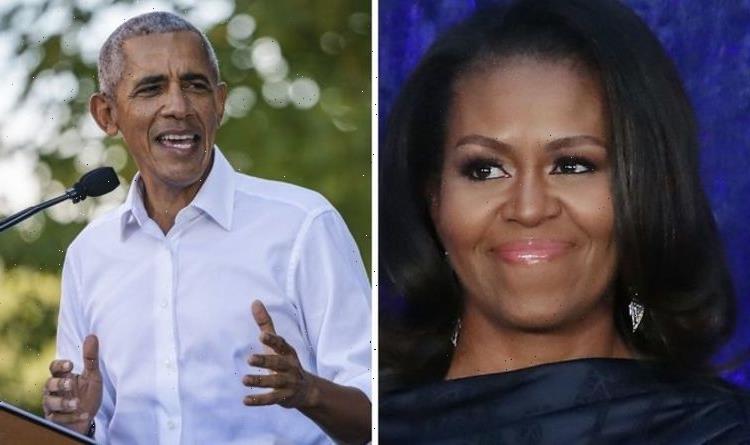 Brexit: Obama discusses the future of the European Union

Former US President Barak Obama will appear on this week’s instalment of The Graham Norton Show on BBC One. Obama, who was the 44th President of the United States from 2009 until 2017, joined Bruce Springsteen and British actors Dame Judi Dench and Jamie Dornan on the star-studded episode. While speaking with the Irish host about his career, Obama admitted his wife Michelle wasn’t keen on him running for President.

Obama and Springsteen appeared on the popular BBC talk show via a video link from Springsteen’s house in New Jersey.

The pair have developed a friendship over the years, with Obama explaining: “Bruce is kind of shy when you first meet him.

“He’s very charismatic when he is singing but doesn’t say much afterwards. But he said a few things that made me think there is something to this man.”

Bruce quipped: “You don’t make that many friends later in life so to bump into somebody you have some things in common with and who happens to be the President of the United States is a little rare.”

Norton asked the pair about balancing their careers and family lives, with Springsteen admitting his rock and roll lifestyle has created tension between him and his wife.

Obama agreed and explained how Michelle, to whom he’s been married for 29 years, didn’t want him to run for President initially.

“I think it is fair to say that Michelle was not thrilled with the initial idea of my running for President,” the 60-year-old explained.

“Once I became President you are living above the store, so I ended up having more time with her and the girls because everyone comes to you and at the end of the day you just go upstairs – there is no commute.

“That period was easier, but campaigning was rough.”

The Obamas have two children together, Malia, 23, and Sasha, 20, who were thrust into the spotlight from a young age after their father became President.

Later in the show, Obama was quizzed about having parties in The While House, to which he replied: “What is true is that we did have some good parties there, and it turns out that if folks are at a good party, they don’t want to go home so it would go late sometimes.”

He jokingly added: “People certainly misbehaved in ways I would not have expected under the portraits of George and Martha Washington!”

Later on in the interview, Obama addressed the importance of Americans needing to respect each other in spite of their differences.

He explained: “What we are looking for I think is a sense of a common recognition of each other and that we can function politically without demonising or hating the other side.

“Having a baseline of respect for each other as citizens and the values that our parents raised us on are the things we can recapture and have to recapture if we’re to make any progress.”

On a lighter note, Obama revealed he hoped his podcast with Springsteen – named Renegades: Born in the USA – would continue.

He said: “My hope is that alongside our book that Bruce gets back to writing songs and maybe I’ll write a few things on my own, but we will keep going as long as people will have us.”

When Norton asked if he would secretly like to tour with Springsteen a smiling Obama quipped: “There is no doubt that politicians are just failed rock stars!

“We’d all like the life Bruce has but we don’t have the talent.”

The Graham Norton Show airs Fridays on BBC One at 10.35pm and episodes can be watched on BBC iPlayer.