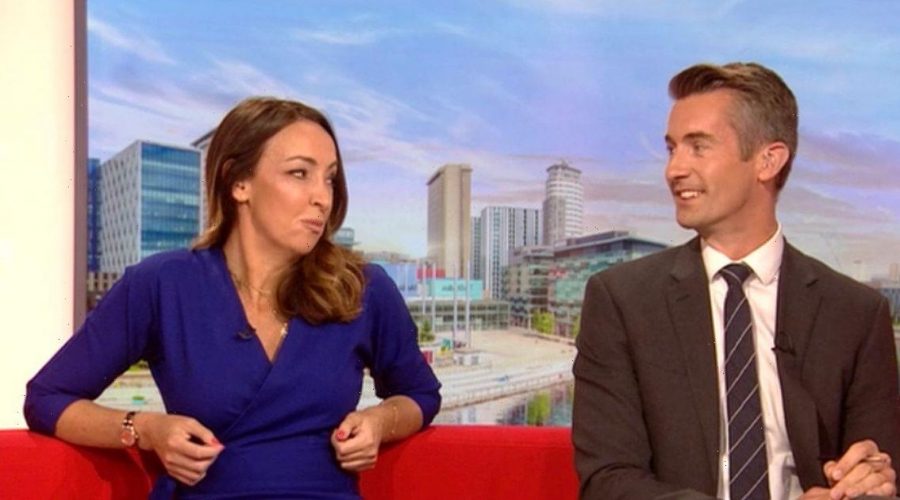 BBC Breakfast once again descended into chaos on Tuesday (August 2) as host Ben Thompson warned things will "end badly" when a key procedure was skipped.

Sports correspondent Mike Bushell was reporting live from the Commonwealth Games in Birmingham with weightlifter Chris Murray, who scooped the gold medal in the 81kg lift.

But things quickly took a turn when Mike allowed Chris to lift him into the air – something which couldn't be broadcast live on the programme for insurance reasons.

Instead, Mike posted a cheeky snap to his social media pages of him being hoisted up by Chris, with Sally quipping that things would surely end badly.

Host Ben Thompson told a red-faced Mike: "Mike, I spied this morning that on your social media, Chris has been lifting more than weights this morning. Do you wanna have a look at Mike's social media?"

Clearly unsure what to say, Mike responded: "Er, yeah, he did, erm, give me a little lift. But I'm like a feather compared to…"

Ben then joked: "Yeah and there's too many wires [in between you now]!"

Mike told Ben and Sally: "Yeah, it was no problem for him! Have a look at the social media, you can see!"

A harried Sally told Ben: "I don't think we've filled in enough forms for them to do that live on the telly, have we?" as he agreed, "No – it'll end badly!"

Meanwhile, before he was fully micced up, Mike shared an incredible snap of Chris hoisting him over his shoulders, as Mike waved his arms in the air.

Posting the snap on Twitter, he wrote: "He can lift the equivalent of a grizzly bear so I’m like a feather.

"@chris_j_Murray new weightlifting gold medalist 81kg who gave us one of the most emotional winning moments @birminghamcg22 joins us @BBCBreakfast at 0730!"

Mike's fans quickly poured into the comments section with their reactions, as one gushed: "Loving the Superman pose Mike!"