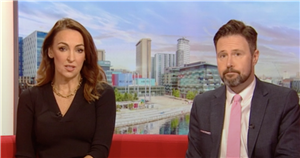 BBC Breakfast viewers were left divided on Wednesday morning (November 23) after convicted murderer Sarah Sands was interviewed on the show.

In an emotional interview, Sarah sat on the red sofa as she told her story to presenters Sally Nugent and Jon Kay.

Mother of three Sarah took matters into her own hands eight years ago when she stabbed a convicted paedophile to death when she discovered that her son, who was 12 years old at the time, was one of his victims.

Retelling her version of events, Sarah is now campaigning for tighter restrictions on convicted sex offenders who change their names.

But although Sarah's story was a heart-breaking one, viewers were left divided on whether she should have been interviewed on a show like BBC Breakfast.

While others were not best pleased with the way broadcasters Jon and Sally questioned Sarah during their chat.

Taking to Twitter, one person wrote: "Is it normal for #bbcbreakfast to interview murderers? Seems really weird."

Another said: "So #BBCBreakfast now decides it's acceptable to plug books written by convicted killers? No matter the provocation, this simply defies belief? Kill someone and be convicted, safe in the knowledge that the #BBC will help you make money from your crime when you get out?"

But others sympathised with Sarah's story and jumped to the mother's defence.

Offering an opposing view, one viewer penned: "Sarah and her children were failed. Why are they making her out to be a bad person? I'm PROUD of her and her boys!!"

While another shared: "The institutions failed that family. Why was that man allowed back into the community? Why was he allowed to change his name?"

The news comes after Labour MP, Sarah Champion raised the issue with ministers and explained some sex offenders are using their new identities to get through DBS checks- which would ultimately reveal past convictions.

She said: "Once they have changed their names, they are able to get a new driving licence and passport in that name.

"That enables them to get a new DBS check. And we are finding that these people are then going into schools and other places where there are children and vulnerable people and exploiting their positions of trust in the most horrific ways."