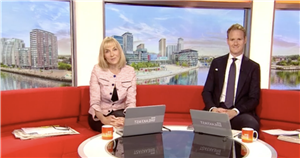 BBC Breakfast turned slightly awkward on Monday morning, as host Dan Walker branded Louise Minchin 'not trained' after she made an awkward blunder.

The presenting duo were busy looking through the day's newspapers as 'Freedom Day' finally arrived, signalling the lifting of Covid-19 restrictions across England.

It was Dan's job to hold up each newspaper as Louise read the headlines aloud for viewers at home.

It came as Louise hedged: "I think it's the Financial Times next?"

And Dan swiftly replied as he held up the paper: "You've got a Financial Times over there, Louise, but I'm not sure you're trained enough to do this, so I'll continue!"

"I've got a very good job over here. My job, basically, is just to hold stuff up while you talk about it," Dan giggled, as Louise told him: "You're being so good at this."

After struggling to open up an edition of The Daily Mail, Dan said: "This is really gonna test me this morning, but I think I've got it in me."

And that wasn't the end of Louise's woes, as Dan jokingly hit out at her after a scheduling blunder that left Louise red-faced.

The duo were chatting to Professor Linda Bauld about the easing of restrictions, as Louise encouraged viewers to send in their questions about England's new rules.

She turned to the professor and said: "Linda, you're here – I think it's like, twenty past seven or something?"

Linda put in: "Just after eight."

"Thank you!" Louise giggled. "Glad you know what you're doing!"

And Dan quickly quipped: "I can hold up the running order if you like?"

"No, no, that's fine!" Louise insisted as the trio shared a giggle.

Fans of the programme were left stunned on Monday morning as they noticed the presenters getting a little cosier on the iconic red sofa, with the two metre distancing rule relaxed across the country.

Louise and Dan still left a respectable bit of space between them – and spread out again when Linda appeared in the studio – but for their audience, it was a relief to see them reunited again.

"So weird to see Dan and Louise side by side on the couch again!" one fan wailed on Twitter, as another penned: "So far the only positive to the change in restrictions is that you can sit together on the sofa!"

"Dan and Louise sitting closer to each other on the #BBCBreakfast sofa, eh. So much freedom!" someone else cheered.

BBC Breakfast airs from 6am each day on BBC One.