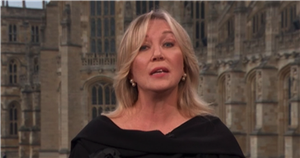 BBC viewers have been reduced to tears following the state funeral of Queen Elizabeth II.

Her Majesty passed away peacefully on September 8, Buckingham Palace confirmed at the time.

A state funeral was held for the Queen 11 days later on September 19.

Viewers from across the world tuned in to watch the Queen leave Buckingham Palace for the final time as she made her away to Windsor to join her beloved late husband Prince Philip.

Kirsty Young presented the proceedings on the channel and ended the programme with a touching speech in a final message to the Queen.

She said: "Well, what a momentous day it's been. From the might of the military parade to that hushed intimacy at St George's Chapel in Windsor."

Kirsty continued stating that Queen Elizabeth II "made history, she was history" and that "she is gone but surely will never be forgotten".

The TV star's emotional monologue clearly touched those watching at home, with some rushing to compliment the broadcaster on her final words.

Taking to Twitter, one fan penned: "Kirsty Young’s final farewell was delivered so eloquently and sincerely, felt myself moved to tears with her."

Another added: "Kirsty Young’s cracked voice, warm words and the short montage were a fitting end to what has been excellent coverage of the celebration of a life well lived."

A third person posted: "Beautiful closing piece by Kirsty Young there, real emotion on her face and in her voice.."

While a fourth social media user said: "Wow, that Kirsty Young speech. Just wow. Summed it up and hit the spot."

"Held it together until Kirsty Young & the @BBC montage . What a day, what a life, what a Queen," someone else typed.