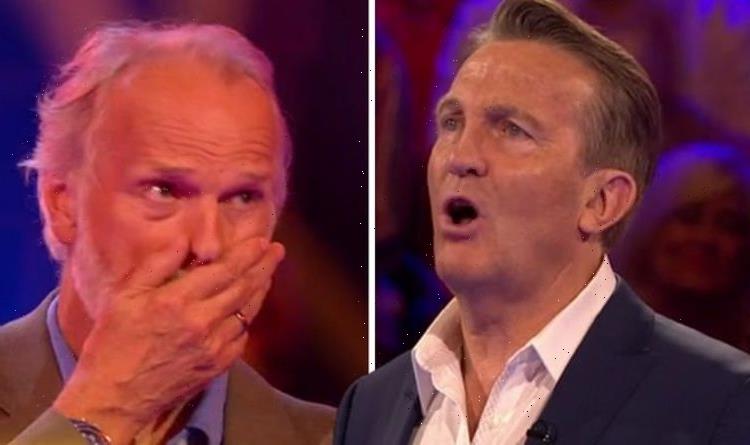 Bradley Walsh hosted a special celebrity edition of Beat The Chasers on Monday night. The ITV quiz show saw stars Omid Djalili, Richard Whitehead, Jenny Eclair and Clive Mantle take on the Chasers in a bid to win money for charity. While some contestants were unsuccessful, acting legend Clive managed to win an impressive £100,000.

Representing his passion for theatre, Clive revealed he was playing to win money for The National Youth Theatre of Great Britain.

He managed to wrack up £3,000 in his cash builder round, but then had the intimidating challenge of going head to head with the Chasers.

The Chasers offered him a range of cash prize options, with the caveat that the more money he played for the more Chasers he’d be up against.

However, Clive decided to go big and take on five Chasers for a £100,000 jackpot with a 19-second time advantage.

“I’m going to have to go for the top,” he declared.

Clive got off to a good start by answering his first two questions correctly, however, he had to pass on a question about The Simpsons.

Battling his way through the rest of the questions, the actor kept up a good pace and as a result, managed to win.

He got a standing ovation from the Chasers after he beat them with 14 seconds to spare.

Bradley was amazed by the actor’s win, saying: “Wow, what a performance.

“In fact, you’ve beaten them with 14 seconds remaining. Extraordinary,” he added.

Clive remarked: “I can’t tell you what that money will do for the Youth Theatre. Fantastic.”

Upon watching the impressive win, viewers quickly took to Twitter to congratulate Clive and the National Youth Theatre for the win.

“Clive Mantle has always seemed like one of the good guys… and he’s clearly also one of the smart ones. Congrats to @NYTofGB on his #BeatTheChasers win,” @scottm said.

Beat The Chasers is available on ITV Hub now.