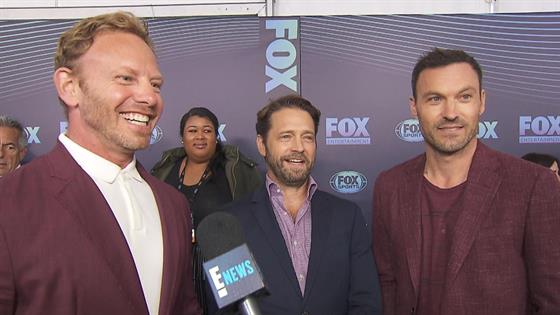 Still having trouble wrapping your mind around the fact that Beverly Hills, 90210 is coming back but it’s also not?

Allow the guys to explain.

“It’s elevated versions of our real selves, so it’s going to be Ian, it’s going to be Brian, it’s gonna be Jason,” Ian Ziering explained to E! News at Fox’s Upfront presentation on Monday.
“And there’s gonna be hints of some of the things that occur in our real lives, but they’ll be exaggerated. The stakes’ll rise, the tensions will permeate through different storylines. We’ll bring together a lot of comedy, some drama, in a way that really it’s more assisted reality, heightened reality than a complete reboot. But it’s going to be us coming together to get the show back on the air.”

“So the idea is we’re playing ourselves eventually recreating a reboot of 90210,” explained Brian Austin Green.

Per Fox, the show is a six-episode “event series” is described as a “”brand-new serialized drama—with a healthy dose of irreverence—that is inspired by their real lives and relationships with each other.”

“Having gone their separate ways since the original series ended 19 years ago, Shannen, Jason, Jennie, Ian, Gabrielle, Brian and Tori reunite when one of them suggests it’s time to get a “Beverly Hills, 90210″ reboot up and running. But getting it going may make for an even more delicious soap than the reboot itself. What will happen when first loves, old romances, friends and frenemies come back together, as this iconic cast – whom the whole world watched grow up together—attempts to continue from where they left off?”

The latest promo for the show, which finds the cast haunted by their old theme song, is below!

“It’s kind of like comfort food,” Ziering told us of reuniting with his old castmates. “I worked with these guys at a time in life…very formative years. We went through fire together, reallyd id things that very few people did at our age, and just the fact that we get to do this again is kind of like a double bonus.”

Soon after the reunion series was announced, Luke Perry, who played Dylan McKay, died of a stroke on March 4. That loss was felt hugely around the world, but especially among the cast of Beverly Hills, 90210.

“It’s kind of hard to reconcile,” Ziering says of Perry. “I mean we’re all still dealing with a tremendous loss, so I don’t have any words for you there.”

BH90210, which begins production soon, will premiere Wednesday, August 7 at 9 p.m. on Fox.