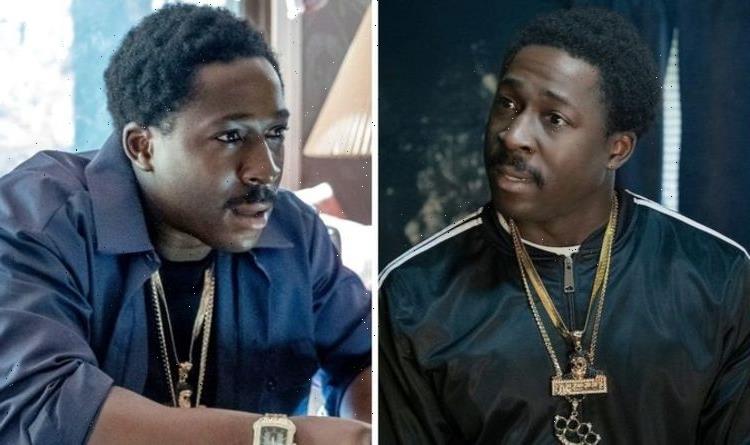 From producer 50 Cent, Black Mafia Family (BMF) takes a look at the rise of one of the most notorious crime families in American history. Demetrius ‘Big Meech’ Flenory is no longer on the streets of Detroit, but the Starz series’ breakout star Eric Kofi-Abrefa managed to speak to him to prepare for his performance as Lamar Silas, based on his real life rival, Layton Simon.

The series regular confirmed to Express.co.uk he has had conversations with Big Meech himself from prison to prepare.

Kofi-Abrefa managed to get his hands on archive clips and interviews from magazines to research his acclaimed new role on BMF.

Although real life drug dealer Layton Simon has avoided the public eye for some years, his rival Big Meech is currently serving a 30 year prison sentence in Federal Correctional Institution.

In their conversations, Big Meech revealed he had been watching the show, which features his son Demetrius Flenory Jr. portraying his own father.

“He was just telling me how the guy was, Layton Simon.”

The actor laughed: “He just gave them grief. That’s the only way I can explain.”

Based on OG Layton ‘The Beast’ Simon, Lamar Silas has been a constant thorn in the side of the Flenory brothers, Demetrius and Terry (Da’Vinchi), throughout BMF’s first season.

His fate in future instalments, including the confirmed second season, has yet to be confirmed, though Kofi-Abrefa is keen to continue.

While Lamar will stop at nothing to overthrow the Flenories and rule Detroit with an iron fist, the actor revealed Layton held the brothers in high regard.

“Funnily enough, he actually had a lot of respect for them,” Kofi-Abrefa confirmed.

Still, he was also given some valuable advice from Big Meech in order to do justice to the fictionalised version of Simon.

Kofi-Abrefa said: “He told me, he said ‘You’ve gotta put your best gangster foot forward if you’re playing this guy.’

“Coming from a guy sitting in the can for nearly 20 years, I have to take that seriously!”

Despite still serving out his prison sentence, Big Meech has been able to keep up with BMF, as Kofi-Abrefa confirmed: “He’s loving it.”

The latest episode of the new crime series leaked a week earlier than expected, and featured an unrecognisable cameo from 50 Cent’s collaborator Eminem.

However, Kofi-Abrefa’s intense portrayal of the show’s villain has been the biggest talking point for viewers so far.

From his surprisingly impressive singing ability on display in episode six to even more cold-blooded violence in the latest chapter, Lamar has truly become a force to be reckoned with.

Even so, his time on the series could be coming to an end as B-Mickie (Myles Truitt) and Kato (Ajiona Alexus) vowed to take him out themselves.