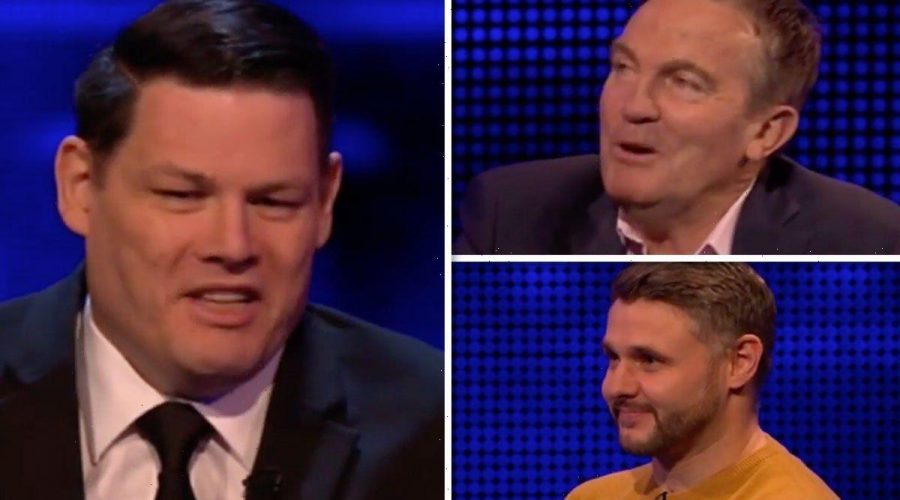 Neil, Sheila, Kate and Joe were all hoping to beat Mark ‘The Beast’ Labbett and take home a portion of Wednesday’s jackpot. However, as Bradley Walsh kicked off the ITV quiz show he was left taken aback when player Neil explained why he would like to take on Mark before the day’s Chaser had been revealed.

After a tough cash builder round, Neil had earned £3,000.

Before finding out who the team would be up against, Bradley asked if Neil had a preference.

He said: “I’m not sure if I want to take him on but Mark used to be one of my teachers back in school, my maths teacher so it would be interesting to see who teaches who a lesson.”

“He did not,” the stunned host replied. “Was he really?”

Read more: The Chase’s Darragh Ennis delights fans as he renames The Beast

Coincidentally, Mark was revealed to be the Chaser as Bradley quipped: “We meet again.”

“Are you here to quiz or hand in that piece of homework you still owe me from 18 years ago?” Mark asked.

Bradley interjected: “What sort of pupil was he?”

Mark identified the school and year he had taught the player before adding: “Bright but not super bright because I can’t remember him that well.”

“Maths A-level was my end,” Neil quipped as Mark revealed how much money he was prepared to offer his former student.

Neil decided to stick with the money he’d earned and sailed through to the final.

Bradley commented: “Five out of five that’s excellent. That doesn’t tell the true story, the cash builder. Different ballgame at the table.”

Mark remarked: “I used to do the odd quiz when I was teaching I might have regretted that now.”

Sheila was next to take on Mark but was defeated after opting to play for the higher offer of £33,000.

Kate then followed suit and was unable to add the £7,000 she racked up in her cash builder round to the jackpot.

The final contestant, Joe, joined Neil in the final by adding £4,000 to the prize fund.

However, Mark comfortably defeated the pair’s score of 13 with 58 seconds spare.

He commented: “You guys did really well. You can look at it another way, you did your score 13, Kate did seven on the cash builder, her in there on her own and you’re suddenly 18, 19 and then welcome to pressure so we’ll never know.”

The Chase airs on ITV on weekdays at 5pm.

04/05/2022 TV & Movies Comments Off on Bradley Walsh stunned by The Chases player connection to Mark Labbett Was he really!
Lifestyle