Few things capture the spirit of Christmas better than births and weddings, and on Saturday night’s Call the Midwife Holiday Special on PBS, there was a lot of both.

The anticipation began to build when Nurse Phyllis informed everyone that St. Cuthbert’s Hospital was sending some 20 extra expectant mothers their way because they didn’t have the room. This stressed out Sister Julienne and her staff, in part, because all of the pupil midwives with the exception of Nancy were on leave, and the maternity home was already at capacity.

After Pupil Midwife Nancy made a mischievous joke about what was going on in March, Sister Julienne cleared her throat and said they should prepare for the worst and Nurse Phyllis added that everyone should pray for a miracle. Nonnatus House was also short Nurse Lucille, who was too busy planning her and Cyril’s wonderful wedding to deliver babies.

It was a preparation phase that included securing sweet keepsakes including her grandparents’ locket, which had her parents’ wedding photos nestled inside. Lucille and Cyril’s family couldn’t attend the wedding so the sweethearts had to creatively work in touches from home with the help of their church and work friends.

Things got a little touchy on this front when Sister Hilda offered to make a cake and Mrs. Wallace from Cyril and Lucille’s church said that women from their congregation would dress in all white and present the newlyweds with cakes they’d made per a Jamaican wedding tradition. This hurt Sister Hilda’s feelings a bit but she rebounded by throwing Lucille’s “hen party” aka bachelorette bacchanal. 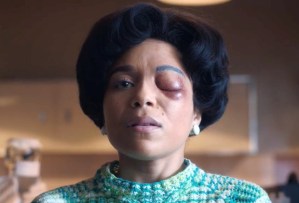 If you were thinking things couldn’t get wild at a hen party thrown by an Anglican nun, you had another thing coming. Sister Hilda got a hold of some rum a grateful gangster (more on him later) gave Dr. Turner and she spiked the punch. By the end of the night, Lucille was so tipsy from the festive drink, she fell up the stairs at Nonnatus House and gave herself a shiner.

Sadly for poor Lucille, her black eye grew worse and eventually became swollen shut. This freaked her out so badly that Lucille wouldn’t let Cyril see her and she said that based on the doctors’ healing predictions — no less than 10 days — they wouldn’t be able to get married on Boxing Day (Dec. 26) and would likely have to call off the wedding.

That’s when Sister Monica Joan came to rescue with an ancient cure. She proposed they use leeches to suck out the pool of blood behind Lucille’s left eyelid and with a little help from Dr. Turner, it worked! It actually worked and the wedding was back on. Hurray! 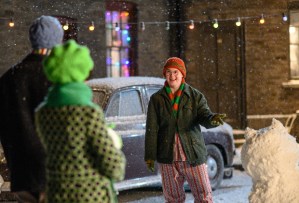 When Dr. Turner attempted to explain the science, Sister Monica Joan comically cut him off. “The chemistry is of no consequence,” she exclaimed. “Our bride to be will be restored to unblemished perfection and that is the only fact that matters.”

Other wedding-day hiccups arose such as Mr. Randall, the man who was supposed to walk Lucille down the aisle, breaking his arm and Nurse Phyllis sobbing at the sight of Lucille’s dress because she was still mourning Nurse Barbara’s sudden and tragic death from three seasons ago. But Cyril and Lucille rolled with the punches.

They asked Fred, who was supposed to be Cyril’s best man, to accompany Lucille to the altar instead and Reggie became the best man. As for Nurse Phyllis, Lucille pulled out the pearls the elder nurse had been too sad to use and wrote her an especially kind and encouraging note.

“Wear your pearls today for Barbara,” Lucille’s message read. “Because love lasts longer than time itself and friendship never dies.” Nurse Phyllis then said she would miss working and living with Lucille and she said she would miss Nurse Phyllis, too. But, she added, she would still be living nearby and would see everyone whenever time would allow. (Hmm. Does this mean Leonie Elliott who plays Lucille is leaving the show before Season 11?) 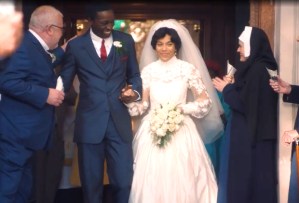 Nurse Phyllis also had a little surprise of her own for Lucille. She had children, whom Lucille had delivered as a midwife, serve as attendants in the wedding and this moved the already touched and overjoyed bride to tears. The Shining Tabernacle Choir sang at the end of the ceremony and during the reception, when the ladies in white presented Cyril and Lucille with their cakes, Sister Hilda got to present hers as well.

As for that onslaught of babies, they arrived on Christmas Day as predicted. A patient named Anita had an especially troublesome birth because she was a heroin addict and her baby girl was born with the same addiction. Anita’s husband, the gangster who had relied on Dr. Turner for far too many favors, proved to be more compassionate than expected and urged his wife to go into a rehabilitation center. As for the baby, the children’s hospital would have to slowly ween her off the opiate.

Evelyn Howells baby — another boy — had to be delivered with Tim’s help using forceps, and Maria Kathpoplis hemorrhaged, but she and her baby went to St. Cuthbert’s where they successfully received blood transfusions. Oh, and Trixie and Matthew made eyes at each other, like a lot, but didn’t act on it. See? Christmas miracles all around.

What did you think of the 2021 Call the Midwife Holiday Special? Grade the installment in our poll and drop your thoughts in the comments.