Of all the challenges a character such as straitjacket-uniformed Captain John Abraham in the naval legal drama The Code might have thrown at Australian actor Luke Mitchell, the biggest comes as a bit of a surprise.

"Not putting my hands in my pockets," Mitchell says, laughing. "They give us pockets but you're not allowed to put your hands in them. It's just temptation. It's brutal." 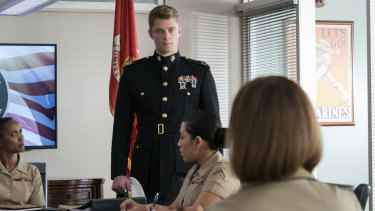 One good man … Luke Mitchell in a scene from The Code.Credit:Mark Schafer/CBS

A sort of modern twist on the 1990s navy drama JAG, the series follows a group of navy lawyers who "take on America's toughest challenges inside the courtroom, where each attorney is trained as prosecutor, defence lawyer, investigator and Marine".

And the uniforms, Mitchell adds, aren't just there for show, or to tempt idle hands. They're an unofficial co-star. "As soon as you put the uniform on, that informs your behaviour," the 34-year-old Gold Coast-born actor says.

"Obviously in the lead-up to shooting they're not going to give you the uniforms to practice with so you're kind of practising on the job. There's a little bit of a feeling-out process with what you can and what you can't do whilst you're in character."

The Code was created by Craig Sweeny and Craig Turk, and the pilot script was written by Craig Sweeny. Mitchell says he was immediately struck by the tautness of Sweeny's writing. "I just read it really easy, really quickly and I think it's a really interesting look at the world of Marine lawyers," Mitchell says.

The series gives Captain Abraham – nicknamed Abe – a foil in the form of Captain Maya Dobbins, played by Anna Wood, and the oversight of a matriarchal military figure, the no-nonsense Colonel Glenn Turnbull, played by Dana Delany.

Abe's fencing with Maya, Mitchell says, is particularly fun to play. "We're both super-competitive, both highly-driven, and very intelligent," he says.

Abe is by skill a leading prosecutor and Maya a defender; they don't always work on the same case, but when they do there is inevitable conflict. And, sometimes, something more.

"There's a really beautiful scene where we're against each other and Maya does something to help Abe," Mitchell says. "She doesn't go outside of the rules to do that and she will never admit that she's done that."

It wasn't strictly research but while preparing for the role, Mitchell says he did revisit Rob Reiner's 1992 film A Few Good Men, which starred Tom Cruise and Jack Nicholson. The film, written by Aaron Sorkin, is considered one of the best courtroom thrillers of modern cinema. "Great movie," Mitchell says. "It holds up very well."

The Code dives into the realm of American military justice, tackling cases which do not necessarily exist outside that world.

In one episode, Mitchell says, they tackle a case involving a breach of Article 99 of the Uniform Code of Military Justice, which deals with "misbehaviour" in the face of the enemy. "In layman's terms, that's cowardice, which is a really big deal in the military," Mitchell says.

"In the real world, people are cowards all the time, and there's no ramifications, you wouldn't get in trouble for that," Mitchell says. "But in the military, in the Marines, if you're a coward, that potentially means that someone else is going to hurt because you didn't do your job."

The role comes after a handful of breakthrough roles for Mitchell, including the US remake of The Tomorrow People, Marvel's Agents of Shield and Blindspot.

The Code also puts Mitchell in number one position on the show's call sheet, essentially confirmation of him as a television leading man. "I don't really like it," Mitchell says of the curious honour. "I feel like no matter what number you are on the call sheet, you do the work, you turn up, and you give it your all."