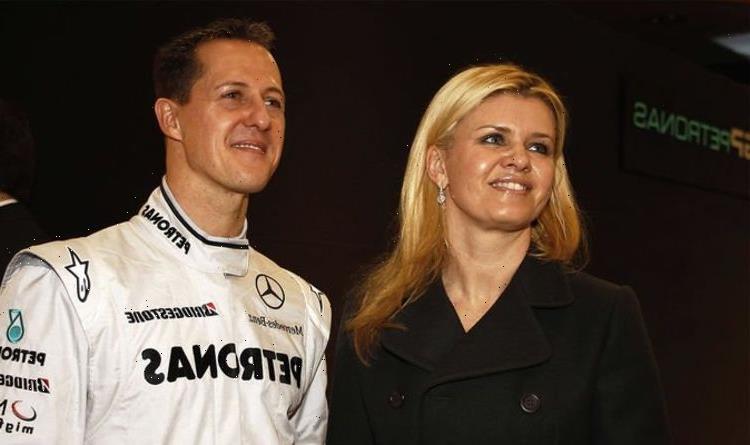 Michael Schumacher is one of the most iconic sportsmen on the planet having won seven world championships in Formula 1 and dominating the sport. Tomorrow, a Netflix documentary will be released, speaking with the most important people in his life. His son Mick Schumacher, who is now a Formula 1 driver himself for Haas, will speak on the film as well as Michael’s former colleagues from his illustrious career. The show also talks to Schumacher’s wife, Corinna, who discusses her husband’s career as well as his condition following his skiing accident in 2013.

Corinna explains that she went to great lengths to help her husband be in the best frame of mind possible heading into every race.

She says in the Netflix film: “Actually, I always went with him throughout those years. It might have been in the bus or somewhere behind the scenes, but I was always on the road with him.

“We always enjoyed it together. It was a support to him, just knowing he wasn’t alone. Because we were travelling around the world changing time zones, we really did make sure that he slept well.

“And Michael planned practically everything down to the minute. Get up at such-and-such a time, 15 to 20 minutes in the bathroom.”

Corinna knew just how seriously Schumacher took his career, and even spent a night on the toilet just to make sure he wasn’t disturbed before a race.

She continued: “One night, when we were in Suzuka, I realised there was no way I was going to fall asleep, so I spent half the night sitting on the toilet, in order not to wake him up, to let him have a good night’s sleep.

“So I read my book in there. On the other hand, when we were at home and Michael had to leave early, I never heard him. He was so quiet.

“He always came to my bed just before he left, stroked my arm, gave me a kiss and said, ‘I’m leaving.’ And he was gone. He never woke me. He was always very considerate towards me.”

Corinna also discusses how life is now in the Schumacher family, and opens up on her husband’s current condition.

She said: “I miss Michael every day. But it’s not just me who misses him. It’s the children, the family, his father, everyone around him.

“Everybody misses Michael, but Michael is here – different, but here. He still shows me how strong he is every day.”

Schumacher is an icon of the sport, and widely recognised as the greatest driver of all time.

However, Lewis Hamilton’s unerring dominance in recent years has led to debate over whether there is a new greatest of all time.

Both the German and the Briton have seven world titles to their name, and Hamilton is currently battling to secure his eighth title.

But Dutch driver Max Verstappen is putting up a big challenge this season, and the two drivers have clashed on the track on multiple occasions.

Just last weekend, at the Italian Grand Prix in Monza, Verstappen and Hamilton came together at the first chicane of the famous track, leading to both drivers retiring from the race.

Recently, Express.co.uk spoke to Lord Peter Hain, a Labour peer who is Vice-Chairman of the All Party Parliamentary Group on Formula 1, and he said he thinks Hamilton is the best driver of all time.

On Hamilton, he said: “I think he is the greatest of all time. I was a fan when Stirling Moss was driving, I have followed all of the greats including Senna and Schumacher since then, and I don’t think there’s anyone who beats Hamilton.

“The demands on drivers today are much greater than they were in Schumacher’s era. It’s much tougher to win a world championship than it was then.

“No disrespect to Schumacher, I think Hamilton off the track is head and shoulders above anyone due to his promotion of equal opportunities on grounds of race but also for women.

“I think he sets an example, as he has got more and more prominent he has become more and more articulate on issues affecting mankind, including climate change, race, and diversity.”