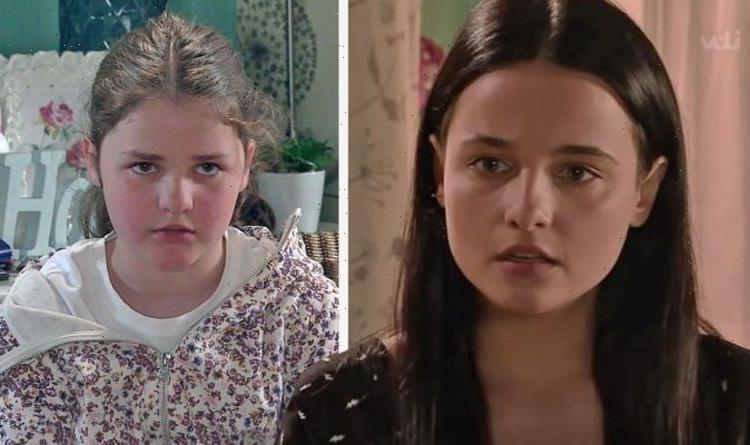 Coronation Street viewers have seen Hope Stape’s (played by Isabelle Flanagan) darker side in previous years, earning her name as John Stape’s (Graeme Hawley) daughter. The child was sent away for rehabilitation and her mother, Fiz Stape (Jennie McAlpine) thought Hope’s behaviour had changed – until recently when Tyrone Dobbs (Alan Halsall) left the family for Alina Pop (Ruxandra Porojnicu). Having only dated for a few months, Alina found herself pregnant and this sparked more jealousy and anger from Hope. Official soap spoilers for next week’s episodes have revealed Hope will take revenge against Alina and sets her flat on fire. Will the new mother-to-be take drastic action and with the support of the authorities, make sure Hope is sent away?

Hope previously ran into the middle of the road when she was in the care of Alina.

And this week, she will be seen taking her anger out on a teddy bear, ripping it’s head off.

But it seems her behaviour is set to get worse, and Alina and her baby are in danger.

Next week, despite Tyrone’s attempts to make Hope feel included in the plans for the new baby she feels abandoned when he starts planning drinks to celebrate the pregnancy.

To add to this, Tyrone cuts their time together short when he has to rush off to the hospital with Alina who is suffering stomach pains.

At the hospital, the sonographer confirms the baby is fine and Alina and Tyrone head home, collecting Hope on their way.

Much to the couple’s surprise, Hope gives Alina a present for the baby – a toy dinosaur – and Alina is touched.

But as Tyrone and Alina discuss the fact they’re having a boy, Hope stares at the dinosaur with mounting fury.

Fiz comes to collect her later that evening and Hope steals Alina’s keys before she leaves the flat.

Alina, on the other hand, is too tired to go for drinks and persuades her boyfriend to go alone while she has an early night.

Meanwhile, at Fiz’s house, Hope declares she wants nothing to do with the new baby and hopes he’s never born, leaving Fiz utterly shocked and orders her up to bed.

But instead of doing what she is told, Hope sneaks out of the back door heads over to Alina’s flat, letting herself in to retrieve the dinosaur.

Once she’s taken back the toy she heads back to Number 9, with Fiz oblivious as to what she’s been up to.

Alina, who is at the flat and sleeping soundly, doesn’t realise there is smoke creeping under her bedroom door.

On the Street, Eileen Grimshaw (Sue Cleaver) and Sally Metcalfe (Sally Dynevor) are horrified to realise the salon flat is on fire and call the emergency services.

Word soon gets around and Evelyn Plummer (Maureen Lipman0 rings Tyrone to tell him what’s happening and he rushes back to the Street.

Fiz, Evelyn, Sally and Eileen stand back as Alina is loaded into the ambulance and Tyrone arrives just in time and climbs into the vehicle with her.

Hope watches from her bedroom window, was the fire anything to do with her?

Alina, thankfully, is okay albeit a little shaken. In the hospital, she assures Tyrone that both she and the baby are fine.

The next day, everyone in Weatherfield is talking about the fire and Tyrone joins Fiz and Evelyn to discuss the fire and the possible causes.

Hope is quick to point out Alina was alone in the flat so the fire must be her fault and this causes a few eyebrows from the adults to be raised.

Outside the salon flat, the fire investigation officer tells Tyrone it would seem the fire was started by an aromatherapy candle and Alina is horrified to think she caused the fire and put her baby in danger.

Walking home, Evelyn and Hope spot Craig Tinker (Colson Smith) talking to the fire investigation officer and Hope asks whether the person who started the fire will get into trouble and this makes Evelyn’s suspicions grow.

Later that evening, when Hope was out of earshot, Evelyn suggests to Fiz that Hope might know more about the fire than she’s letting on.

Fiz jumps to Hope’s defence but deep down she wonders whether Evelyn is right.

Back at the salon flat, Alina’s sadness is evident as she realises all the things they’d bought for the baby have been destroyed in the fire.

And she is left thinking about what actually happened; Alina tells Tyrone that in order for the fire to have started in the cot, someone must have moved the candle.

Together, they are left trying to make sense of the fire and are later stunned to find out from the police an accelerant was used to start the fire and now it is being investigated as arson.

When she goes to leave the flat, Alina, realises her keys are gone says someone must have let themselves into the flat and started the fire.

When Tyrone is around Number nine, he is bemused by how shaken Fiz is and quizzes her about Alina’s missing keys and conversation turns to Hope.

Together they tell the child they need to talk to her about the fire and Tyrone and Fiz try to work out how to deal with Hope.

When words gets out Hope was presumably responsible, Alina might be extremely concerned for the child and suggest to Tyrone he needs to speak to Fiz about sending her away and getting her help.

Coronation Street airs Monday, Wednesday and Friday at 7.30pm and 8.30pm on ITV.

27/07/2021 TV & Movies Comments Off on Coronation Street: Alina Pops nasty side emerges as she gets Hope sent away for fire?
Lifestyle