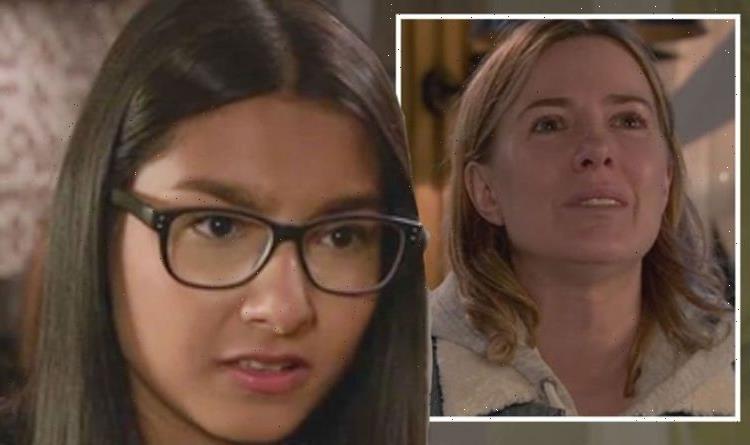 Asha (played by Tanisha Gorey) has been prevalent to storylines on Coronation Street this year as she has been helping Nina Lucas (Mollie Gallagher) through the trauma of her hate crime ordeal. With Kelly Neelan (Millie Gibson) now living under the same roof as the Alahan girl, tensions are fraught on the cobbles as Abi (Sally Carman) cannot forgive her for the part she played in Seb Franklin’s (Harry Visinoni) death. As it seems the grieving mother had an axe to grind at the end of the Boxing Day episode of the ITV soap, she could end up killing the wrong person as she takes revenge.

As the residents of Weatherfield begin to look forward to the New Year following the events of Christmas Day, it seemed everyone was about to start a new chapter.

Wanting to mark the occasion with his family, Dev Alahan (Jimmi Harkishin) organised a meal at the bistro for his children and Kelly.

Unfortunately, with her twins having returned to Australia after spending the festive season with her, Abi was left reeling over Seb’s death once more.

When she saw Kelly had left flowers on her son’s memorial, the grieving mother stormed around to the Alahan’s before they went out for their meal.

Abi told the youngster in no uncertain terms she “hated” her before she went to go and drink herself into oblivion to block out the pain.

Thinking Abi had enough of her for one day, Kelly was excited to enjoy her meals with the Alahans, only for Abi to turn up drunk.

As they tried to eat their meals, she sat there goading the teenager, telling her how much she despised her and how much she wanted to get revenge on her.

Sitting and fighting the tears, Kelly tried to block out the abuse she was being given but she couldn’t get away from it.

In the end, Dev had to call over Debbie Webster (Sue Devaney) to try and help with the situation as he thought she could get Abi out of the bistro.

The drunk character even muttered whether she was bothered doing a stretch behind bars if it meant Kelly was out of her life for good.

Three down, two to go

With the situation in the bistro not getting any better, at the same time, Asha was talking with her girlfriend Nina at home.

Nina was central to the hate crime attack which resulted in Seb being killed and due to the trauma she has been through, Roy Cropper’s (David Neilson) niece has become fuelled with anxiety someone close to her is going to die.

For weeks, she has been trying to keep tabs on her partner as she was worried something bad was going to happen to her.

“I try to push it to the back of my mind but it’s always there bubbling under [the surface],” she explained to Asha.

“The fear that everyone I love will get taken away from me,” she continued, before reeling off a list of people who she’d lost.

“Three down, two to go,” she added, referring to the fact Asha and Roy were the only people still alive she cared about.

Asha was concerned for her girlfriend and just as they were about to continue their conversation, Kelly burst through the door.

It might have seemed like a throwaway moment but Kelly walking through the door at the same time Nina feared Asha could die might symbolise what’s ahead.

By the end of the episode, Abi revealed to her husband Kevin Webster (Michael Le Vell) she had a plan in mind to get rid of Kelly for good.

In the past, her plans haven’t always gone as she had wished and this is where Asha could come into play.

Although Abi wants to get rid of Kelly, she might accidentally end up killing Asha instead as the youngster could be wearing the ring clothes.

As they are now living together, the teenage girls could get their washing mixed up and Dev’s daughter could walk out of the house wearing her house guest’s clothes.

However, believing this to be Kelly with her hood up, Abi could strike and kill the person she believes to be her enemy.

She could be left utterly distraught if the body rolls over to reveal it was actually Asha who she murdered instead.

Could this be a tragic case of mistaken identity as the grieving mother takes out Asha instead of Kelly?

The actress who plays Abi, Sally, has spoken about how her character is feeling when she decides to launch an attack on Kelly.

The soap star said: “She still feels much too raw and Kelly is getting the brunt of her grief and anger. If Kelly had gone away and lived somewhere else for six months and then come back it might have been better and Abi may have been able to move on.

“She can’t deal with the fact she is on the street but also the fact that Kelly has been given the chance to live the life that Seb had taken away from him.

“She has been given the apprenticeship and she has a real chance of a good future and it is a reminder every time she sees her it is a punch in the stomach reminder that her son will never have that because of her.

“This has completely blindsided her and she has lost reason. She is bullying this kid, it is quite nasty. She is going to make Kelly’s life miserable until she leaves.”

Does Abi have it in her to kill someone let alone the wrong person?