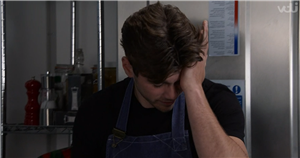 Coronation Street fans were left fearing for Emma Brooker and Curtis Delamere on Friday's episode after she recently declared her love for him following the discovery of his "life-threatening" heart condition.

During the episode, Emma found herself worried about Curtis' health, who could "drop dead" at any second, after he got stressed over their charity calendar.

After finding himself stressing out, Curtis stumbled in the kitchen before rubbing his face in pain as a terrified Emma looked on.

However, the character insisted: "No, it's fine. It just happens sometimes, I just need a moment."

Later in the soap, Emma admitted to Curtis she was concerned, she said: "I was just so worried after earlier…" To which he insisted: "I told you, it happens sometimes, I'm used to it. If I stopped what I was doing every time something stressful happened, I'd never do anything!

"Look, a long time ago, I made a decision. I could either give into this or just live my life to the fullest, whatever I've got. I chose the last one. If this is going to work, I need you to respect that, okay?"

Taking to Twitter, viewers shared their concerns that their blossoming romance storyline could end in tragedy due to Curtis' "life-threatening" heart condition.

One person said: "#Corrie It’s gonna end in tears with Curtis and Emma isn’t it?"

A different viewer put: "#Corrie Emma and Curtis are adorable. It's going to be a heartbreaking tragic storyline, isn't it?" followed by heart broken and crying emojis.

Another follower commented: "Really hope Curtis and Emma can have a happy ending despite his heart condition. #Corrie."

While a different account added: "Loving the story with Emma and Curtis. Really hope this romance continues. Xx #Corrie." It comes after soap watchers were left in tears earlier this week after Emma declared her love for him using her father Steve McDonald's taxi's walkie-talkie.

Prior to this, Curtis was forced to tell Emma's dad Steve that he could "drop dead" at any second after he accused him of cheating on his daughter.

After ending things with Emma as he would rather her "hate him" than "grieve him", Curtis decided to tell her the truth but she told him they were "done" as he should have been honest from the start.

Curtis then went to leave Weatherfield in a taxi where he told Steve what had happened and admitted he wished he had "more time" with her as she "lights up" the room.

Playing Cupid, Steve pretended to call a taxi for Curtis and he ran to find his daughter Emma to encourage her to give him a second chance as they are "good together".

After realising he had already left in a taxi and his phone was going to voicemail, Steve managed to get Curtis' taxi signal on his own cab's walkie-talkie where Emma declared her love.

Later on the soap, Curtis surprised Emma at the Rovers Return Inn where he had bought her a tea infuser, so they can both get better at timing.

Emma sweetly said that she can "handle" his "life-threatening" heart condition and that it is "worth it" so they can pursue their romance.

For all your updates on Coronation Street, sign up to our daily OK! newsletter.