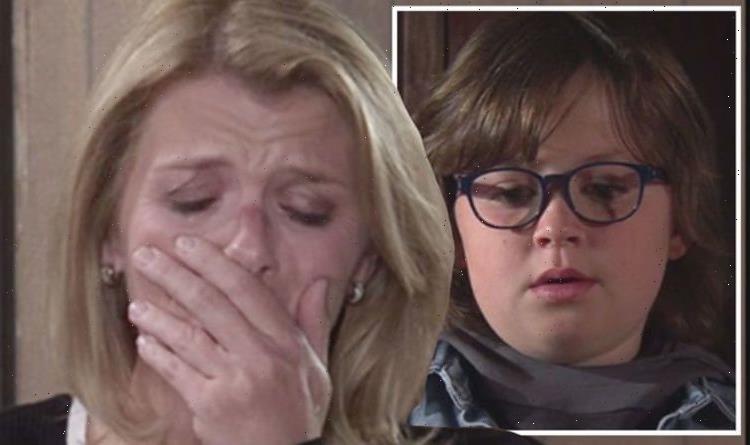 Sam (played by Jude Riordan) was told at the end of Monday night’s visit to Coronation Street his mother Natasha (Rachel Leskovac) had died as a result of the injuries she obtained after being shot by drug lord Harvey Gaskell (Will Mellor). Wednesday night’s episodes of the ITV soap picked up with the youngster living with his father, Nick Tilsley (Ben Price) and stepmother Leanne Battersby (Jane Danson) in a hotel as the police surveyed the scene of the crime in the Victoria Street flat. Unfortunately, as the trauma of what’s happened fell on the schoolboy’s parents, could they be forced to give him up for adoption so he can get the best chance at life?

The drama kicked off with Sam wanting to go with his father to the flat to pick up some belongings, to which Nick refused to take him.

Despite his best efforts to keep his son away, the businessman was shocked when Sam ran into the flat as Leanne was unable to stop him.

This led the youngster to see where his mother was killed and with no sense of closure still, the schoolboy wanted to see his mother at the undertakers.

Nick and Leanne took him to the cafe where they discussed why him seeing Natasha’s body probably wasn’t the best idea.

Sam was unwilling to accept this and said he was going to go and see his mother on his own before storming out of the cafe.

Leanne was left in tears as Nick chased after his son but she was comforted by her sister, Toyah Battersby (Georgia Taylor).

“This is heartbreaking. Nick is bringing up things about him and his dad and now he wants to do what’s best for Sam and of course, I can’t say anything, can I?” she declared.

“Because I’m not his mother and he’s not my son,” the beloved character continued, to which her sister said: “Not right now.

“But Simon [Barlow] wasn’t either and you might fast become the closest thing Sam has to a mother,” Toyah remarked.

Leanne didn’t like this idea and replied: “No, I can’t do it. I can’t be his mother,” as she wiped away the tears.

I can’t be his mother

In the meantime, Nick went to see his son, who was sitting in Victoria Gardens and he explained how he felt about his mother passing.

The youngster said he felt as if Natasha wasn’t really gone as he hadn’t seen her body but he knew she wasn’t there anymore as he had been told she’d died in surgery.

The only thing he wanted was to see her so he could have some closure as he was being tormented about how they argued the last time spoke to his mother.

Although they did get to say goodbye to each other, he had been upset with her for getting stuck in traffic instead of being at the Horror Nation Street event.

Understanding his son’s plight, Nick finally agreed to take Sam to the funeral parlour to say goodbye to his mother.

Back in the cafe, Leanne and Toyah spoke some more and it was clear Nick’s partner wasn’t willing to be a mother again after losing her young son Oliver Battersby (Emmanuel and Jeremiah Cheetham) last year.

“I’m a horrible person. I don’t even know whether I want to be his mother. I just worry every time I look at him or hug him or kiss him goodnight, I’m going to wish it was Oliver.

“I don’t know, call it self-preservation or just selfishness but I’m afraid to get close to him in case something happens.”

Toyah reassured her sister nothing was going to happen and explained: “You don’t have to make any concrete plans yet.

“This has all just been thrust upon you and there has been no time to process. You haven’t even discussed with Sam what he wants,” she added.

After Nick and Sam finally saw Natasha, they returned to the hotel room and the youngster didn’t handle the experience well.

He locked himself in the bathroom and left his father seriously alarmed by his son’s behaviour, leaving him in tears.

Leanne returned to the hotel not long after and found her partner in a state, with Nick telling his other half: “I’m not a good enough dad.”

She tried to reassure him as Toyah reassured her and it seemed to be doing some good for him as he told her he loved her.

“I’m so glad we can do this together,” he said and although Leanne shook her head in agreement, she didn’t look too optimistic.

In the coming days and weeks, the new family unit will try their best to make sense of what’s happened and try to rebuild together.

However, Leanne and Nick have already said they both don’t know if they’re able to give Sam what he needs following Natasha’s death.

After some thinking and some heartbreaking choices, they could decide they want to put him up for adoption so another family can give him the life he deserves.

This would be the last thing Sam would want after his mother’s death but his parents would tell him they love him so much they can’t look after him.

Knowing it’s the best thing to do, Nick and Leanne will be crushed as they wave goodbye to the boy who brought such love into their life but will they end up regretting their decision?

27/10/2021 TV & Movies Comments Off on Coronation Street heartache as Sam Blakeman put up for adoption in harrowing death twist?
Lifestyle