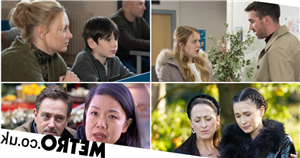 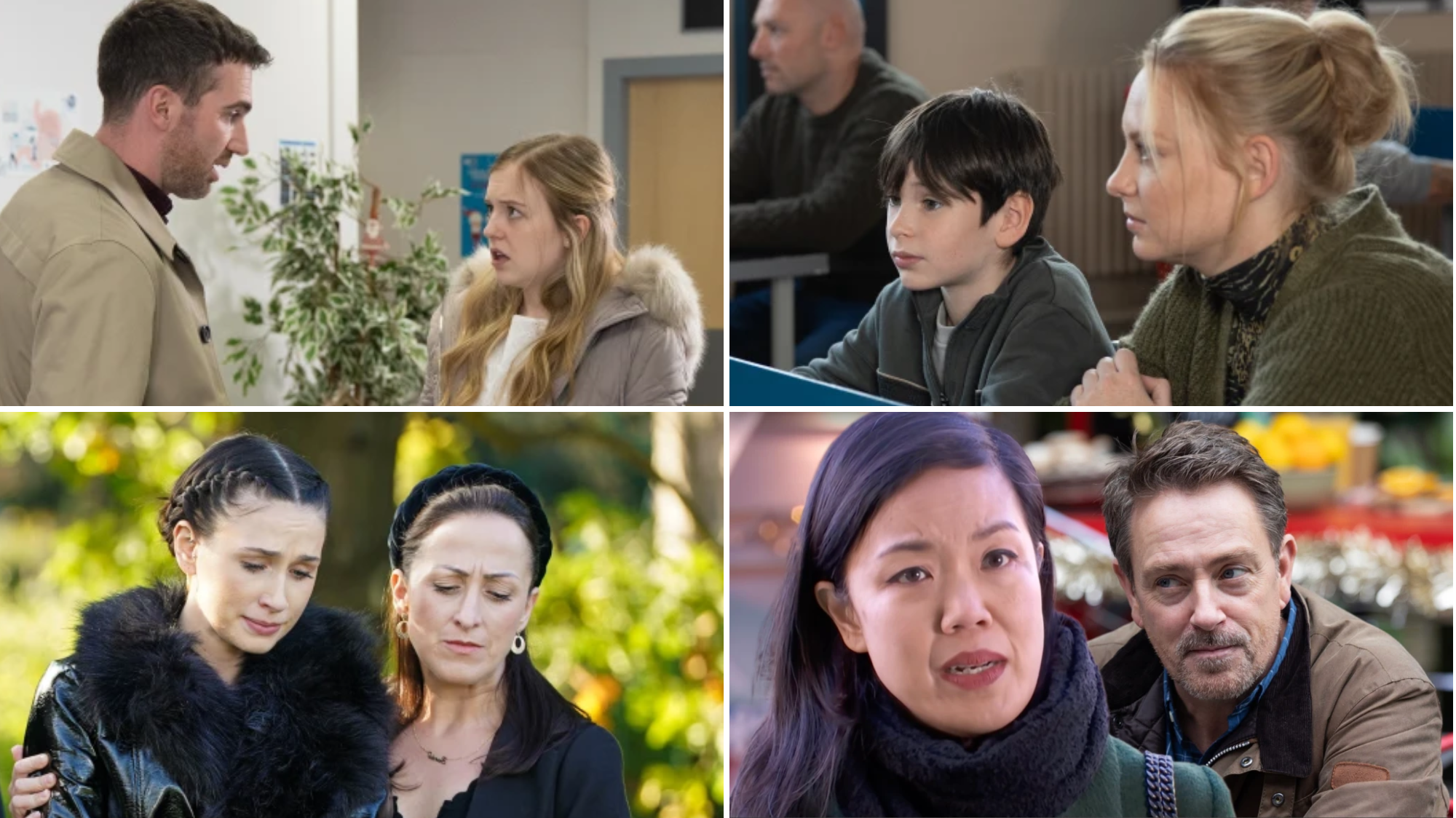 Shocks and sadness are at the heart of what will prove to be a game-changing week for some of our favourite serial dramas.

EastEnders is, of course, the one to watch next week, as the BBC One soap honours one of TV’s most-known characters, with the residents of Walford paying their final respects to Dot Cotton.

Coronation Street, meanwhile, will see Summer Spellman having some serious questions to answer when Mike and Esther insist on attending her baby scan, while Emmerdale’s Kyle Winchester gets to see dad Cain Dingle behind bars.

Over in Hollyoaks, Honour Chen-Williams confronts hubby Dave about the big secret he’s keeping, but what will he have to say for himself?

For all this and more, we’ve got you covered, with 25 must-see moments from next week’s soapy action.

1. Daisy reveals that she’s found a lump in her breast. On Jenny’s advice, she tells a shaken Daniel, who insists that he will accompany her to the doctors.

2. Martha breaks the news to Ken that she starts rehearsals on a new play in Hull tomorrow. Ken is gutted at the thought of saying goodbye to Martha so soon after she re-entered his life, but he’s later left stunned when Martha suggests he should move with her!

3. Mike and Esther insist on dropping Summer at the hospital for her baby scan but agree to wait outside. Summer and boyfriend Aaron therefore play for time in the hospital – until Mike suddenly appears at their side and announces he should attend the scan too! Summer and Aaron brace themselves to tell Mike the truth – but will they follow through?

4. Fiz finds Gemma modelling a wedding dress while Beth pins it, and she wants to know what is going on.

5. Simon and Jacob spot someone stealing the factory van and thus they race over and apprehend the thief. As the pair bask in their glory, Leanne is less than pleased to see them acting so matey, as old wounds resurface.

6. When Nick reveals the bistro repair costs are spiralling, Leanne sighs that they will have to dip into Sam’s inheritance again. Nick hides his guilt at deceiving her.

7. Griff presents Max with a new laptop to help him edit films and run the gang’s social media.

8. The morning of Dot’s funeral proves incredibly difficult for Sonia, who finds herself unable to write the eulogy. Hoping for some inspiration, Sonia uses Dot’s spare key to the launderette to let herself in and Martin later finds her there, offering her some words of comfort, encouraging her to speak from the heart.

9. Dot gets the send-off she deserves as she leaves Albert Square for the last time – and Sonia is left overwhelmed by the outpouring of love for her grandma. Colin Russell, Mary Smith, Lofty Holloway, Lauren Branning and Disa O’Brien make returns to pay their respects to beloved Dot.

10. Colin takes the opportunity to discuss his life with Sharon, and soon afterwards a car rocks up in the Square, with Felix giving the driver directions to Dot’s house. Colin exits the wake with Kathy, who recognises the driver as none other than Barry Clark – his former lover.

11. Dot’s great-nephew, rocks up in Walford on the day of the funeral and bumps into Sonia, who takes him for a cup of tea at No. 25. After an emotional day, the duo share a moment together. Is this the beginning of something special?

12. Sonia is concerned that Dotty will leave her homeless if she inherits No. 25. The morning of the will reading is a tense one, as Sonia, Dotty, Jack and Reiss gather, while solicitor Kenneth Foskett divulges Dot’s last wishes. Dotty, meanwhile, is excited at the thought of selling the house and travelling around the world.

13. Janine is yet again determined to make Linda’s life hell, as she spitefully asks Kathy Beale (Gillian Taylforth) to cater the wedding reception, knowing full well that Linda is within earshot. Janine’s paranoia continues to spiral, and – fed up of Linda’s constant presence in The Vic – she demands that Mick buy her out!

14. Kat and Alfie reminisce about Nana Moon, who they were both incredibly fond of, reflecting on her dying wish that they would get together.

15. Chas is feeling grateful for Paddy and Eve as she enjoys a festive dinner with her loved ones, ashamed that she almost threw away everything she had for Al. Belle, however, starts to piece together the truth after a comment from Chloe, and she confronts Chas with her suspicions about where she was the day Faith died. Unable to lie any longer, Chas comes clean and Belle starts to wonder if the affair was the reason why Cain killed Al.

16. Moira, meanwhile, is stunned as a tearful Belle breaks down, before admitting the truth about what she knows! Moira is furious and begins to work out that Cain must’ve found out about the affair, which is the reason why he met with Al in the barn that day.

17. Kyle’s state of mind is the topic of conversation once more as Matty is seriously concerned about him, convinced that he should get professional help. Moira and Amy soon worry that he’s right. Kyle, meanwhile, refuses to go to school because he misses Cain, and thus Moira arranges for a visit in prison, but Kyle struggles to contain his emotions upon setting his sights on his dad.

18. Gabby and Dawn sift through the nanny applications. Delighted, Kim smells competition as she gives the pair their first joint task. Dawn and Gabby pitch opposing ideas to Kim, and the nanny appointment becomes a formal affair!

19. Marlon offers Naomi the role of his assistant, while Rhona is delighted to see him back in his element.

20. Ethan invites his boss for a meal. Ethan’s flustered as Greg arrives but he is placated by calming Marcus. Greg enjoys his lunch but has he another agenda?

21. Beau lands the teaching position at the school, and he assists Tony at The Dog with the decorating ahead of the teacher’s Christmas party. Darren, however, begins to grow jealous of just how much time Nancy is spending in charming Beau’s company. What’s more, Beau proves to be popular with the crowd, as he starts to dance with everyone in attendance, much to Darren’s dismay.

22. Mason turns to the Men’s First chat forum after Leah calls him a virgin, and – hoping for some assistance – he rings Serena, but before she picks up, Leah drunkenly collapses on the bed, not noticing Mason. In harrowing scenes, he takes pictures of her and uploads them to the Men’s First chat. Afterwards, all eyes are on Mason.

23. Honour is on tenterhooks ahead of the arrival of her sister Mei Lian, much to Dave’s dismay. Honour reveals she doesn’t want to introduce Maxine to her family, and she later rents a flash car to impress her sister. Dave has enough and calls Honour out over her behaviour, but Honour turns the tables, revealing that she knows that his ex-wife took a restraining order out against him!

24. Honour calls Dave the biggest liar of all, and talks about how he’s let her down so many times, which leads to him storming out. Honour, determined to put things right, tracks him down at The Loft. Dave, meanwhile, tells her the truth about what happened with his ex-wife.

25. Christmas has come early in Scott’s household as he dresses as an elf and celebrates the day early as Vicky plans to spend the festive period with her mum. However, when Scott presents her with tickets to a boxing day panto, she has some shock news.