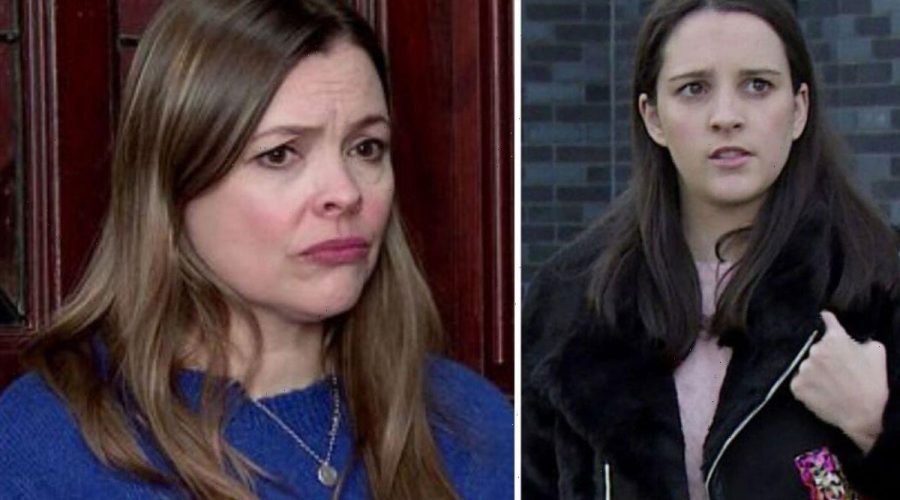 Coronation Street couple Amy Barlow (played by Elle Mulvany) and Jacob Hay (Jack James Ryan) have been going strong and have been making plans to move together and take their relationship to the next level. In upcoming scenes, they are set to move into No.1 leaving Tracy (Kate Ford) ecstatic to rekindle her relationship with her daughter. However, on top of the trouble she is having with her house, Amy reveals some shocking news.

Official spoilers reveal that Arnie tells Daniel Osbourne (Rob Mallard) that the roof at No.1 is worse than he thought and they’ll need scaffolding up the back of the house too.

Ed Bailey (Trevor Michael Georges) fumes at Tracy and Daniel for making his life hell with the ongoing scaffolding being put up and taken down, alongside the addition of a portaloo.

As Amy and Jacob move back in, she is fuming to find out that Daniel and Daisy Midgeley (Charlotte Jordan) have taken over her room, with the pair being put on a blow-up bed.

Wanting to make sure her daughter is comfortable and wanting to work on their relationship, Tracy orders Daniel to get the toilet fixed and remove the portaloo from the house.

He does as she asks and Tracy is relieved that the portaloo is loaded onto a truck and taken away.

However, she may have spoken too soon as Arnie returns to fix the toilet, but refuses to do so until they pay him cash upfront.

Knowing how tense the house is set to become if he doesn’t find a solution, Daniel meets Arnie in the Rovers to try and reason with him but has no success.

Adam warns Arnie that Tracy isn’t the woman to be messed with, and brings up her previous conviction of murder.

Will Arnie feel pressured into helping? Or has Adam just pushed him away further?

Back at No.1, Tracy begins to recover her relationship with Amy but is left stunned when her daughter explains there is something she needs to know.

Is Amy about to drop the bombshell that she is pregnant with Jacob’s baby?

Amy being pregnant could either send her relationship with Tracy either way, bringing them closer or pushing them further apart.

However, the news could also be that she won’t be staying at No.1 for very long, revealing that she and Jacob are set to move into a flat with Summer Spellman (Harriet Bibby) and Aaron Sandford (James Craven).

Amy star Elle Mulvany recently teased at the Inside Soap Awards: “We are moving out! We are moving into a new flat with our friends, so it’s very much Friends-esque.

“There’s going to be loads and loads of fun and you’re going to see them in a whole new light.”

“That chemistry that we have off-screen, we’re going to try and bring that on screen. I think it’s going to be a really great dynamic and we’re really excited for it.

“It’s going to be a big Christmas for Jacob and Amy that’s for sure. It will be explosive and emotional, but also good as well.

“I think we’re starting to become a new Steve and Tracy, bringing in that dynamic. We were really unlikely, but we work so well and we get along really well off-screen.”