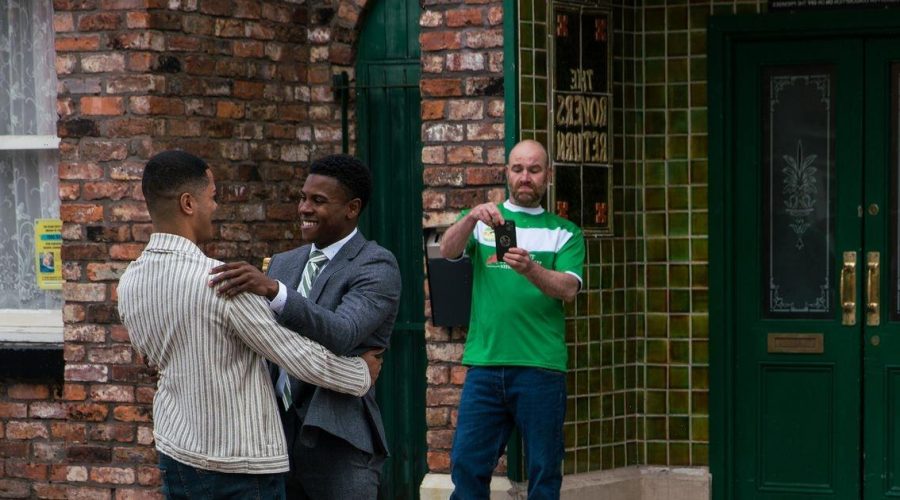 Coronation Street has aired its first kissing scene since 2020 when they were banned due to social distancing restrictions brought in by the pandemic.

Since social distancing was brought in, no stars have been able to touch each other, meaning all romantic and intimate scenes have had to been filmed suggestively.

Some cast members have formed bubbles in order to allow them to film closely together, including Michael Le Vell and Sue Devaney – Debbie and Kevin Webster stars who were locked in a freezer together.

But there have been no snogging scenes on the show or any moments where the cast have been required to touch each other.

But in an upcoming episode intimacy is making a comeback when James Bailey locks lips with his love interest Danny Tomlinson.

Footballer James decides to be open about his sexuality, which he previously kept secret, after leaked photos show him with Danny.

James announces he is gay after he is quizzed by journalists about the images at a press conference.

Danny then tells him he wants to be in a relationship with him, as Tim watches on.

The pair share a kiss and decide to give things a go.

Actors Nathan Graham, who plays James and Danny actor Dylan Brady had negative covid tests ahead of the scenes so they could be filmed.

Their test results allowed them to work closer with one another for the episode.

It also meant that they did not have to keep a two metre distance.

Fans of the soap have been recently warned one episode, dating back to 1968, includes language that some fans may find offensive.

BritBox features classic episodes of the ITV soap opera on its streaming service, but revealed one episode, centred around Hilda and Stan Ogden, features remarks "from a bygone era".

Titled Stan and Hilda's Big Night Out, the episode sees Hilda and Stan, played by Bernard Youens and Jean Alexander, going on a date to a Chinese restaurant.

The accompanying warning reads: "Stan takes Hilda to a Chinese restaurant, but she doesn't quite get the meal she expected.

"With language from a bygone era which some viewers may find offensive."

At one point in the episode, Stan tries to speak to the waiter in French, only to remark: "I couldn't speak to him in English, a son of the Orient."

He later described the food as "foreign tack," adding: "French, Eyetie, Kraut, you can't whack it."