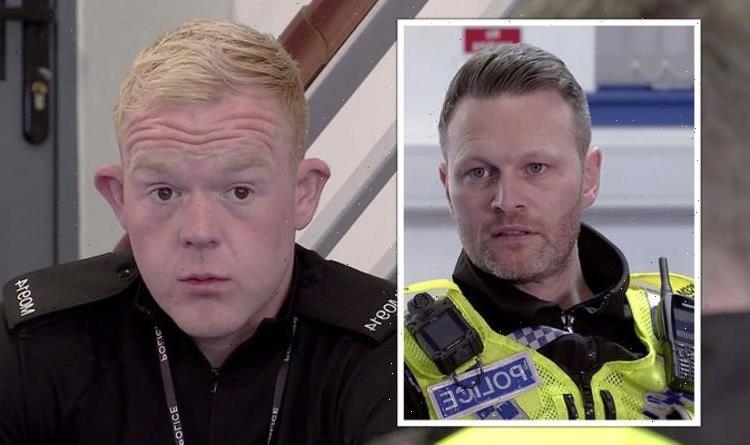 ITV viewers saw some dramatic scenes on Coronation Street on Monday evening. The latest episode of the soap saw James (played by Nathan Graham) and Michael Bailey (Ryan Russell) get pulled over by a police officer. When Craig Tinker (Colson Smith) appeared on the scene, Michael tells him he’s convinced they are victims of racial profiling. Could Craig end up lying about what happened to cover for his colleague? If so, he may be suspended from his job as a police officer.

On Monday night, Coronation Street viewers saw brothers Michael and James take a test drive in a flashy sports car after football star James was offered £30,000 for an interview.

However, after a brief drive on the cobbles, a police car pulls the pair over.

When James questions why the officer pulled them over, the officer arrests him for obstruction and handcuffs him.

While cuffed with his hands behind his back, James stumbled on the pavement and fell to the ground, injuring his leg.

As the police officer calls for backup, Craig quickly appears on the scene to see James in agony on the floor.

Michael quickly tells Craig he is convinced they are victims of an unprovoked racist attack.

Michael exclaimed: “He saw two black guys in a flash car and that was it!”

“Right, well we can deal with that later. But, right now I just want to get James to hospital, okay?” Craig said, before going to speak to the other police officer.

Later on in the hospital, James was convinced that his injury would mark the end of his career as a footballer.

When James returned home on crutches, Michael tried to persuade him to make a complaint against the police officer, but he refused.

Later on, Craig paid a visit to the brothers to speak to them about the incident.

“I am just sorry that it had to come to this in the first place,” he said.

Michael hit back: “Yeah well not as sorry as we are.”

Craig replied: “It is awful when stuff like this happens.”

“Has it happened to you a lot? Have you ever been pulled over because of the colour of your skin?” Michael asked.

“No,” Craig replied “For what it’s worth I don’t think that this was… what I’m trying to say is, I know PC Brody and he wouldn’t have meant it because he’s not a…”

Craig appeared lost for words and Michael remarked: “I’m sorry that this conversation is too difficult for you.”

However, later on, Michael and James were shocked to discover someone filmed their arrest and posted the video online.

This pushes James to accept he should make a formal complaint to the police.

If James does decide to make an official complaint about the police officer, which side will Craig take?

According to official soap spoilers, in upcoming scenes on the soap Craig’s colleague is set to ask him not to mention the fact he thought James’s driving was fine and didn’t warrant being pulled over.

If the other officer is more senior than him, Craig may feel pressured to support his colleague, even if it means lying about the events in order to cover for him.

But, if he’s caught lying about the incident, Craig could be suspended from his role in the police.

Will Craig really be willing to falsify his reports in order to protect his colleague? Or will he stick to the truth?

Coronation Street continues on Wednesday at 7:30pm on ITV.