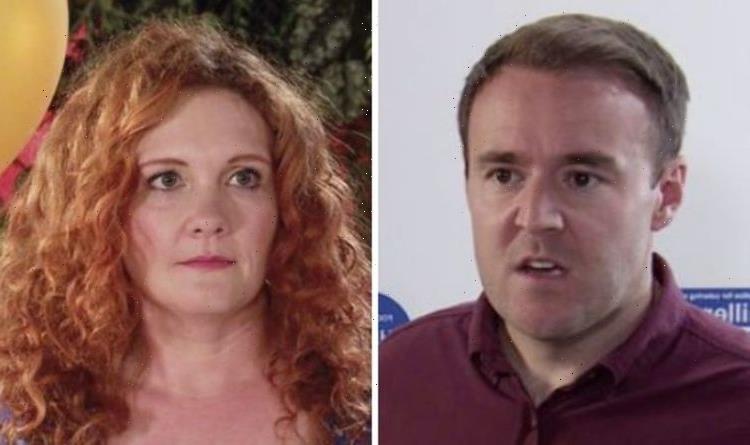 Coronation Street: Nina sobs as Roy leaves in a cab

Coronation Street’s Fiz Stape (played by Jennie McAlpine) and ex-partner Tyrone Dobbs (Alan Halsall) may finally reunite with one another as Phill Whittaker’s (Jamie Kenna) mother arrives and awakens fresh tension between the couples. Fiz and Tyrone’s relationship has seen its ups and downs throughout the years on the ITV soap, but could this be the final straw that brings them back together?

In upcoming scenes, Fiz will continue to face hurdles in her relationship with Phill Whittaker as Christmas approaches and his mother Mimi arrives.

Fiz meets Phill’s mother for the first time when she visits but soon rubs the Corrie stalwart up the wrong way, who is already annoyed at Phill for not warning her about how to the point and particular his mum is.

Fiz is also put out to find Phill and Mimi drawing up plans for his birthday party and ordering hideous party dresses for her and the girls.

Feeling unsupported by Phill after his mother’s arrival, Tyrone finds Fiz at the Christmas market drowning her sorrows and joins her.

However, Tyrone also reveals that Phill has booked a surprise Christmas holiday for her and the girls, to which Fiz is delighted and in a much better mood.

Not wanting to let Mimi spoil her good mood, Fiz makes her feelings clear about his mother to Phill, but her opinions don’t go down too well.

Later in the week, Fiz manages to get through Phill’s birthday party, but when Mimi reveals her special gift is her moving to Weatherfield, Fiz’s heart sinks.

Noticing Fiz’s discomfort at the party, Tyrone takes matters into his own hands and drags Mimi into the kitchen, where he delivers some home truths about her behaviour.

After Tyrone informs Mimi that Phill is the luckiest man alive to be with Fiz, they head back into the party, where Mimi realises she left her microphone on.

As the party ends, Phill reveals his boiler is finally fixed, to which Fiz suggests it is time for him to move back home, with Phill masking his disappointment.

Has Tyrone accidentally told a room full of people he is still in love with Fiz?

Will his declaration of his feelings towards Fiz mean a rekindled romance is on the cards for the old lovers?

Coronation Street fans were recently left in shock as they saw Roy Cropper (David Neilson) make an emotional exit out of the cobbles.

Roy was struggling to come to terms with the fact that Abi Franklin (Sally Carman) obtained to shoot Corey Brent (Maximus Evans) with the same weapon that killed Natasha Blakeman (Rachel Leskovac).

Roy made the decision to exit the street in which he had called home for nearly three decades and signed everything he owns over to his niece Nina Lucas (Mollie Gallagher).

Nina was distraught to learn that her uncle was leaving the cobbles and have him two offerings to try and convince him to stay.

Nina hoped their stories of how Roy had helped them over the years would be enough for him to change his decision.

Roy refused to reconsider, in which he told Nina he was sorry, before exiting his car into a taxi.

It is currently unknown as to whether or not David has officially left his role as Roy, with no announcement being made about his status on the show.

29/11/2021 TV & Movies Comments Off on Coronation Streets Fiz and Tyrone to rekindle romance after declaration of love?
Lifestyle