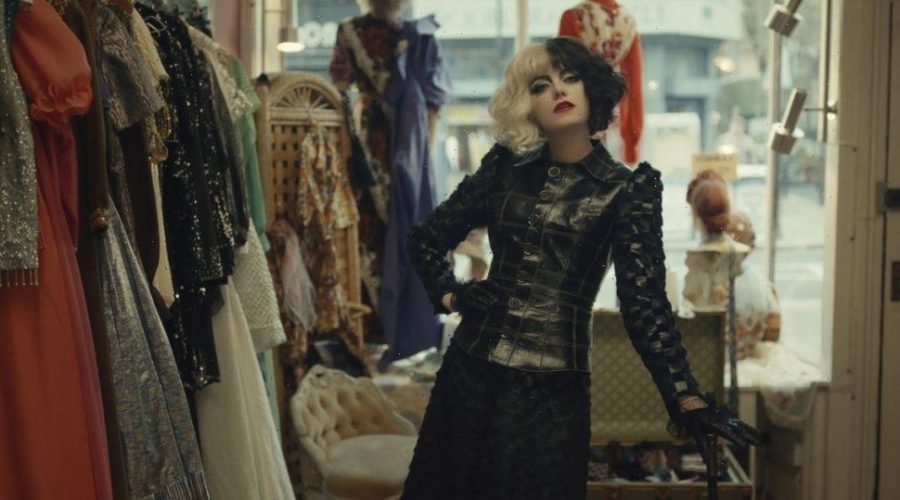 Cruella is the second live-action iteration of the villain from Disney‘s 101 Dalmatians. Glenn Close played Cruella de Vil in a live-action remake and its sequel. This is Cruella (Emma Stone)’s own story, a prequel to even the animated movie and a more sympathetic portrait of her. It’s also more fun than a barrel of puppies.

The young Estella (Tipper Seifert-Cleveland) with the black and white hair is immediately adorable. She’s bullied at school and gets in trouble for fighting back. How relatable it is that the bullies don’t get reprimanded but she does. So, what’s she supposed to do, take it? When Estella’s mother (Emily Beecham) dies, Estella joins up with street grifters Horace (Paul Walter Hauser) and Jasper (Joel Fry) and groes up into Stone.

Jasper scams Estella a job working at Liberty department store, where Estella’s ideas still aren’t appreciated. She does meet The Baroness (Emma Thompson) through Liberty, and joins her design team. But, to really get ahead, Estella reinvents herself as Cruella and steals the Baroness’s thunder with her flamboyant reveals of her own designs.

Cruella captures that harried hard working woman spirit without making Estella a sad sack. She’s driven, and when hard work alone doesn’t break through the glass ceiling, she gets creative.

Throughout this fashion plot, the camera moves dynamically around extravagant sets. There are plenty of fun, chaotic set pieces with epic shenanigans and well choreographed pratfalls. Stone’s reactions, and other characters’, are big without being totally cartoonish. They have the spirit of a cartoon with a live-action quirky sensibility.

That’s fun to watch but it’s also relevant to the plot when Cruella’s demeanor subtly changes. She’s just as entertaining using her energy to go toe to toe with The Baroness. Cruella may go too far but she’s up against a bona fide psychopath, by The Baroness’s own admission. So, lesser of two evils, but also society expects Cruella to roll over, so what’s the other option? Sure, she could kill them with kindness and be the change she wishes to see in the world, but her name is Cruella, not Gandhi.

Classic rock needle drops complement scenes without calling attention to themselves. Choosing Blondie’s “One Way or Another” over “Call Me” was a subtle but correct choice.

There are a few nitpicks with Cruella, really so minor they’re only worth bringing up to show how solid the rest of the movie is. Cruella created such a transportive world that only a few wildly off key moments briefly pull one out of it, but it’s easy to slip right back in.

For one, the reason the film implies for Cruella’s future hatred of dalmatians is as extreme as it is contrived. It seems generic at first, but develops into a more complicated plot. Still, the dalmatians are a minor part of de Vil’s origin story, so they didn’t have to go quite so hard in their few scenes.

The film also reveals how Cruella chose her last name, de Vil. Every time they explain a character’s name in a prequel, they always come up with the most on the nose explanation. There’s also the old cliche of Estella breaking the rules with an outrageous stunt that gets her in trouble but impresses The Baroness. That’s an old cliche too.

If those are the only complaints then Cruella is doing something right. Cruella is hilarious, elegant and empowering.