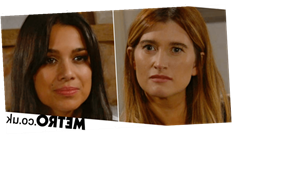 Debbie Dingle (Charley Webb) and Priya Kotecha (Fiona Wade) joined forces in Emmerdale tonight (January 14), as they discovered Al Chapman (Michael Wildman) has been seeing them both at the same time.

Debbie’s return to the eponymous village has left Al on edge, as he feared that she would discover that he is engaged to Priya.

In spite of his efforts to prevent such a thing from coming to pass, that’s exactly what happened during tonight’s double-bill, as Debbie overheard Priya planning her dream wedding, and Chas (Lucy Pargeter) filled her in on the identity of the groom.

Horrified to discover the extent of Al’s betrayal, Debbie decided it was only fair to let Priya know the truth about the man she is intending to marry, and therefore she stormed into Take A Vow and revealed everything.

With photographic evidence to prove her claims, Debbie explained how Al had been seeing her for months behind Priya’s back.

Priya’s world crumbled before her very eyes and, like Debbie, she was horrified to discover the true extent of Al’s betrayal — and the lengths he went to in order to keep his double life hidden.

Debbie informed her that they needed to have this out with Al and confront him head on, but Priya had another idea in mind.

She revealed to Debbie that she wants revenge, and explained that they would team up in order to get it.

The plan: destroy Al and all that he holds dear.

Debbie was in, that’s for sure, but just what exactly does Priya have in mind?

That remains to be seen, but Al is about to find out the hard way that actions have consequences.