Devon Terrell admits that he fell off his fair share of horses while filming Cursed. But you would never know it watching the new Netflix series, as his character, Arthur, leaps onto his steed and valiantly charges into battle, suavely seated on his saddle. But, hey, this is a show about fantasy—at least the actor can crack a laugh while reminiscing about bringing the fantastical world of Arthurian legends to life.

Cursed, a gender-flipped, modernized take on the storied folklore, follows the journey of Nimue (Katherine Langford), a young heroine with mystical powers who is tasked by her mother to deliver a powerful sword to the famed magician Merlin. She teams up with Terrell’s Arthur, a charming mercenary who has the voice of an angel and the deadly sword skills of a knight. Together, they face off against the bloodthirsty Red Paladins, become entwined in the underground network of the Fey, and, of course, find themselves attracted to one another all while the forces of evil are trying to track them down.

You might recognize Terrell as young Barack Obama in the 2016 film Barry. He’s had a couple roles since, but Cursed and his portrayal of a new version of King Arthur will surely push the charismatic actor into the spotlight. Chatting with BAZAAR.com, Terrell opens up about his surprise when he was asked to audition for Arthur, making fantasy more inclusive, the pitfalls of leather pants, and more.

How did you first get involved with the project?

I was helping a friend out with an audition for The Weeping Monk, and I was like, “This is amazing.” I knew Katherine Langford for about three years, because we’re from the same hometown, Perth. Then I asked my agent, got an audition. They asked me to audition for Arthur; I was like, “Huh? Doesn’t make sense.” But through the process, I started discovering that they were like, “We want to find the best person for this role.” So, I gave it everything I had and did a screen test with Katherine. It went super well, and here I am now. 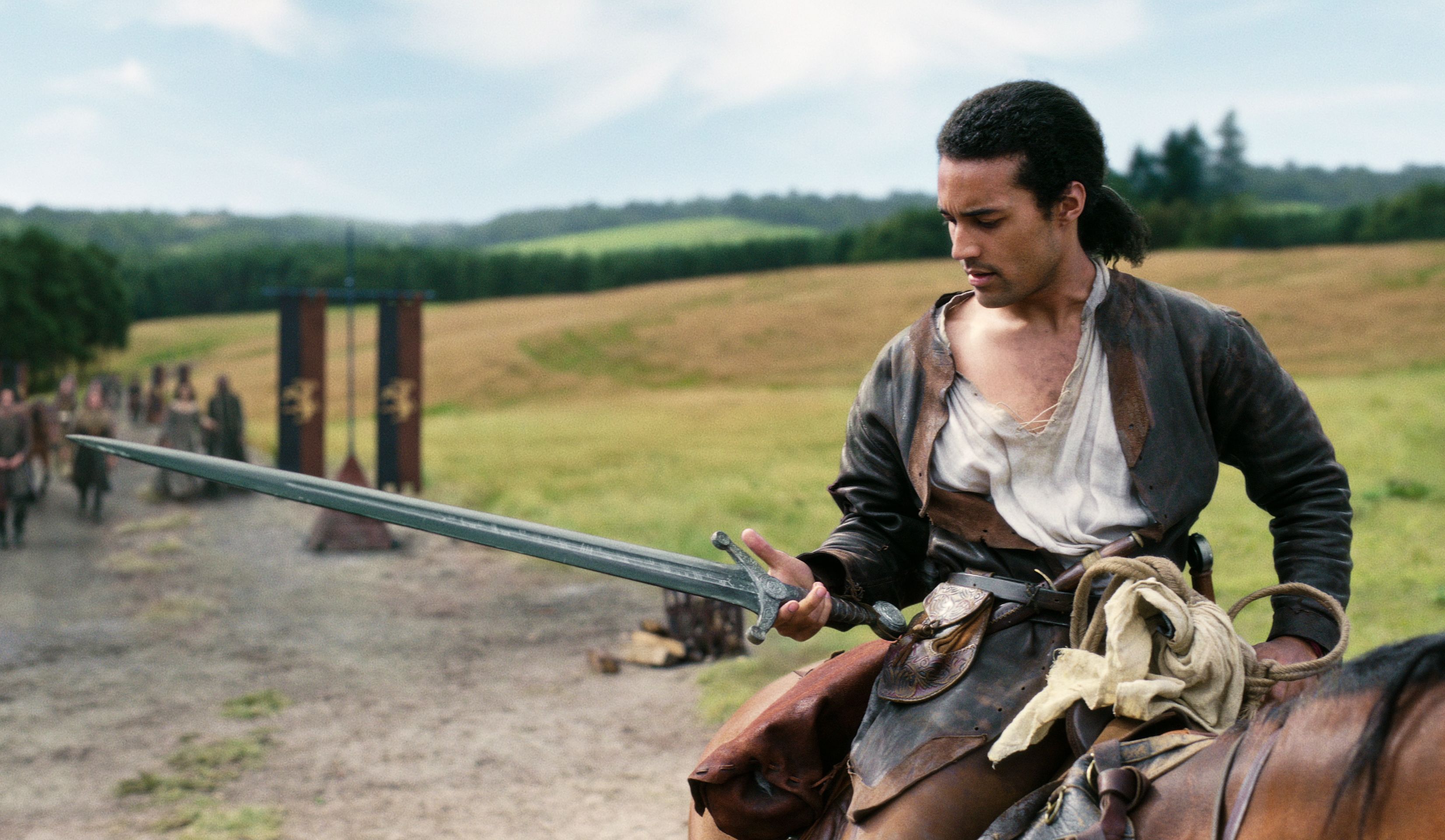 Why were you surprised that they wanted you to read for Arthur? What was it like having the opportunity to bring to life such an iconic character?

As a Black man, as a person of color, growing up I found that there were limited opportunities in the fantasy world. I loved Harry Potter, Lord of the Rings, and Game of Thrones. I never saw myself in those worlds, but I always felt that the opportunities would come at some point. Once I got the audition for [Cursed], I was like, “This is the moment. I need to earn this, I need to give it everything I have.” But I think what scares me is you feel like in these worlds it’s tokenism. [There’s the fear] that you’re just going to be cast because of the color of your skin. My thing is, no, I’ve deserved my place.

As a Black man bringing to life Arthur, are you concerned about possible racism or anger from fans?

I’m honestly very excited for it to come out, because for me, if you do feel that way and you do watch this show, you actually have to sit down and watch it and think to yourself, “Why don’t I accept this? Why don’t I like this?” You have to come to terms with that. But also, what I love about [Cursed] is it’s going to bring so many more fans in, so many new fans that are of color, are of different genders and races, that are going to watch this and be like, “Oh, this show’s tapping into something that’s different. It feels like fantasy’s evolving.” Fantasy’s for everyone, it’s not for just one kind of people or one race.

Fantasy’s for everyone, it’s not for just one kind of people or one race.

With this mythology, most people are familiar with King Arthur and his Knights of the Round Table. But in Cursed, Arthur’s portrayed as a down-on-his-luck mercenary. What was it like portraying this version of the character?

It was great, because I was allowed to find the everyday person, the human side of him. The side that’s vulnerable, emotional. I love that you kind of find him as a character without any purpose. He’s just using his charm, getting on by life. Then you realize, as you understand his relationship with his family, that this is a person that’s actually quite broken and who needs to forgive himself in a lot of ways. You don’t have this sense of, “Oh, of course, that guy’s going to become king.” He doesn’t expect it of himself, no one does. No one actually expects him to become anything. And I love that he keeps proving people wrong throughout the story.

Your character gets to do a lot of sword fighting and stunts. What was that like? Can you tell me about your clumsiest day on set while training?

There’s just so many, it’s kind of embarrassing. I’ve fallen off my fair share of horses. There were scenes where we had to jump on a horse and it was a one-shot. Everyone smashed it and I couldn’t get on the horse, because my pants were too tight. I’m wearing leather! People need to understand, it’s kind of hard. Once you sweat, it [starts] sticking. But there were just some hilarious moments, we had such a good time. There were some moments where Katherine fell off the horse out of nowhere, but she’ll just burst out laughing and get back on.

[With sword fighting], you think like, “Oh, I’m going to do whatever I want and the stunt guy’s going to do everything.” But you realize if you move the sword in like one, two centimeters in the [wrong] direction, you could really hurt someone. It’s very much teaching yourself to be cautious while bringing emotion to the character. You can’t just be wild. They gave me a foam sword [to practice at home]. A lot of my friends will be like, “Dude, you’re in the corner practicing your sword fighting while making eggs. Like, chill.”

Warning: Heavier spoilers for Cursed below.

Where did you film, and what was that set for the stunning Fey sanctuary Nemos like?

We shot predominantly in London at Langley Studios, that was mainly where we had our major sets. We also shot in Wales and Cornwall, which is, like, the corner of England and the craziest place I’ve ever been in my life, because one second it’s rain, hail, and storm, then all of a sudden the sun’s out, the tide’s in, and then all the way out. Shooting there was chaotic. We shot in torrential rain for Episode 10. The Nemos set in Episode 5 was all handwoven branches from people, it was unbelievable. To walk into the set [one day and the next] to see this massive cave that has branches everywhere that looks like a sculpture, I would just walk around being like, “Oh, my God.”

I’m glad you brought up Episode 5, because there’s that scene with Arthur and Nimue in the beautiful hot spring. Was it just a hot tub on a soundstage? I know that filming those scenes can be kind of awkward, but do you have any funny stories from shooting that?

It’s a hot tub they created, except they didn’t have the visuals up, so we were looking at a green screen half the time. It was one of those moments where you’re just like, “Okay, I’m going to get naked. My butt’s going to be out. It’s happening. Just go with it.” Then you focus on the scene, but watching it, I was like, “Oh wow, my butt’s really out.” But it was a really professional set, nothing really crazy happened in the day. Just a couple push-ups before each scene, you know?

Arthur and Nimue’s relationship changes throughout the season, going from him saving her in the first episode to eventually sort of being her emotional anchor once she embraces her power. What was it like having that dynamic shift?

What’s kind of wonderful is that you feel like they grow up in front of your eyes. What I like is there’s this moment of just pure attraction in the beginning. They’re just two young kids that have not a care in the world. It’s the typical bad boy meets the girl who’s looking for an adventure. Then what’s wonderful with the journey is that Nimue receives this power out of nowhere, which is so overwhelming. Everyone sees it as a weapon and a gift. But I can see within her that she finds it to be—sorry, the pun—a curse. Arthur knows what he saw inside of her from the very beginning and she’s moving away from that. The great thing about their relationship is every time someone feels like they’re running away from something, they always pull them back to deal with it. 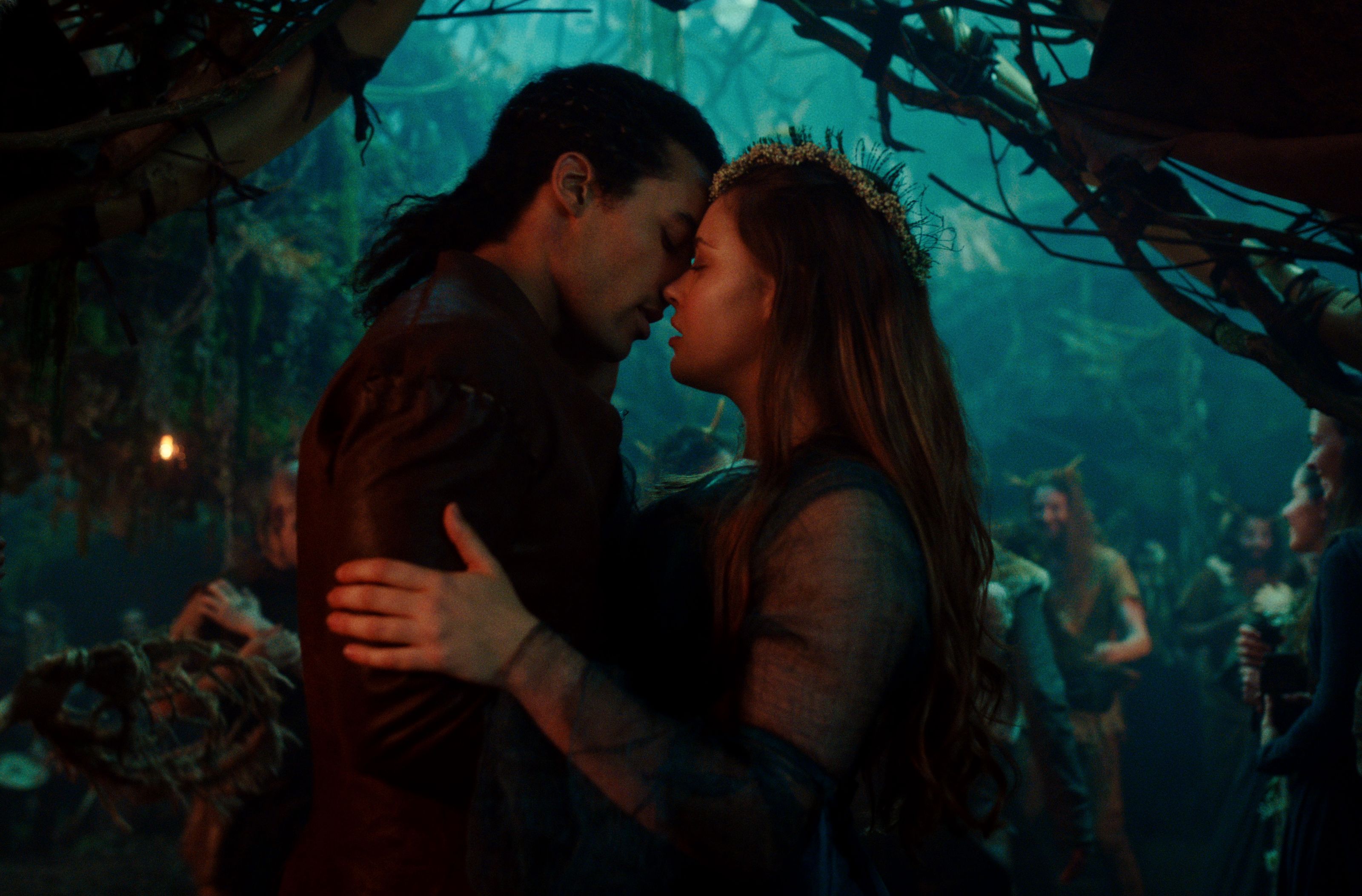 There’s no official Season 2 yet, but how do you think Arthur will feel about his sister Morgana’s transformation into the Widow?

Oh, hell no! [Laughs.] No, the wonderful thing about how Shalom [Brune-Franklin] plays [Morgana] is she’s such a strong character as well. There are so many great female protagonists in this story that I think it sets up Morgana to be … I don’t know if she’s going to be the biggest enemy that we face in the show, or if she’s an ally. That’s what’s wonderful. Our last encounter was me trying to plead with my sister to become closer. Next thing I know, my sister’s now become this all-conquering sorceress. So, it’s a bit freaky. What I love in the story, my character is just this human that is seeing these two incredibly powerful women find themselves.

I noticed you recently got back on Instagram and have been using your platform to talk about Breonna Taylor and Black Lives Matter while also getting ready for the release of the show. What’s it been like balancing all of that?

I used to have [Instagram] when I did a prior movie called Barry. It is one of those things where if you’re not ready for people commenting about you or your life—I just kind of felt like I had to step away. I [now] feel mature enough and ready for those comments to come my way, because I have more of an understanding of myself as a Black man. For me, at the end of the day, I walk day to day as a Black man on the streets, so it’s important for me to say something and what I believe in. The people I look up to—like Viola Davis—I appreciate how they use their platform. I hope I can help educate people and educate myself through that platform but also have fun at times too. With where the world is right now, it’s important for us all to not run away from what’s going on and to run into it. The great thing about social media is you don’t have to just ask your friend of color or your Black friend, the tools are out there to research. It can lead you to books you can read yourself about how to treat people and how people have been treated over history.

This has been a crazy year, but it’s been a wonderful year in terms of bringing social injustice to the forefront for all Black lives.

Cursed is now streaming on Netflix.

This interview has been edited and condensed.