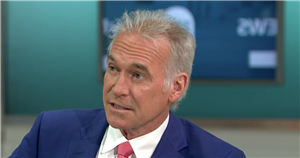 Dr Hilary Jones had to deliver an apology on Good Morning Britain after he'd offered-up information that wasn't quite correct when it came to Covid-19.

The 68-year-old told hosts Adil Ray and Susanna Reid, that those who had already received two vaccines would not need to adhere to the 10 day isolation period.

He said: "A week after the second dose of the Pfzer, 15 days after…. err a week after the Janssen and 14 days after the Moderna and Astrazeneca don't need to self isolate if they'd been in contact with someone who tested positive.

Isobel Rafferty who appeared on the show to debate vaccinating children blurted: "That's news to me."

To which the ITV doctor went on: "I believe that’s the case."

Susanna told him: "I don’t think that that is the case because currently we are being told to isolate."

Adil questioned: "Is that a suggestion from PHG at the moment? They talking about it.

Before Adil added: "That’s a suggestion from PHG but I don’t think that’s current official guidance.

"I’ll check and come back to you," explained Dr Hilary.

Later on in the segment, Dr Hilary was forced to apologise and explain that he'd got his wires crossed.

He said: "I stand corrected on what we said earlier. I think at the moment you will have to isolate even though you've had the jab but the evidence shows in the future that they [the government] may change this."

Fans of the programme were quick to highlight his error as they took to their keyboards to blast the ITV star.

A second asked: "Has Hilary been drinking again? #gmb #Clueless."

Another vented: "Oh my. The doctor doesn't understand the rules. Lots of dangerous misinformation being spread and compounded by the ‘expert’ not having a clue about self isolation rules #gmb."

While a forth penned: "Dr Hillary talking bull**** again #gmb."

Further on in the show, Susanna addressed fans again on the matter, defending her co star as she explained there had been a lot of "confusion" with government guidelines while welcoming a discussion with MP Matt Hancock.